Video of this song from youtube
Average Rating : 4.24
Total Vote(s) : 118
Please rate this song between 1 star and 5 stars (5 stars being the best). Just move your mouse on the stars above and click as per your rating. Your rating will really help us to improve our website. 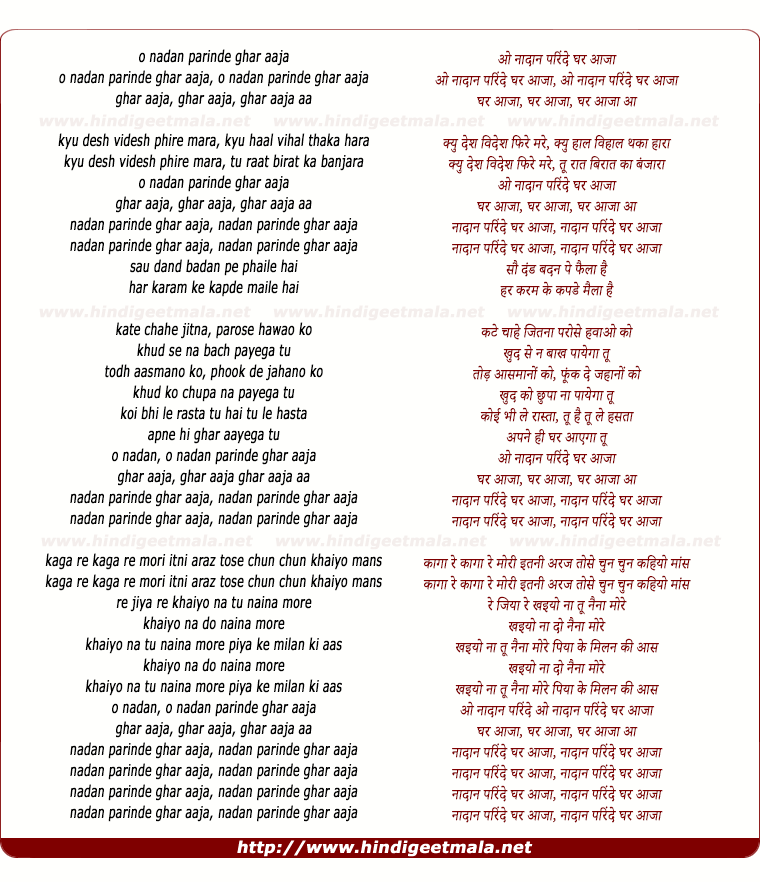 Comments on song "Nadaan Parindey Ghar Aaja"
Tenchoe1111 on Thursday, November 29, 2012
I personally never liked Ranbir 'till I saw his work in Rockstar. He truly
is an amazing actor but let's not disrespect Shahrukh khan. After all, he
is the King Khan and he always will be. For those of you who doesn't think
SRK can act, please go watch Kabhi Haan Kabhi Naan, Swades, Chakde India,
Ddlj, Darr and Baazigar to say the least. Just because you are a ranbir's
fan doesn't mean that you have to ignore other actors' talent. Ranbir is a
great actor but he is not a superstar yet. He's gott

andythaker on Wednesday, April 24, 2013
Translation Part 3: "kaate chahe jitna paron se hawa ko khud se na bach
payega tu tod aasmanon ko phoonk de jahanon ko khud ko chhhupa na payega tu
koi bhi le rasta tu hai tu bebasta apne hi ghar aayega tu" / however much
you cut the winds with your wings, you'll not be able to fend yourself from
yourself.. break the skies and burn the worlds, but you can't hide
yourself, whatever path you take, you are homeless (out there) you will
come to your home only..

sanamo86 on Friday, November 09, 2012
it depends wot u look for in an actor, i value realistic convincing
portrayal of role & depth of characters, which Ranbir does so well, not
ability to look cool & romantic on screen which SRK does. Also I cudnt
agree with u more, when it comes to quality of acting its 1)Aaamir 2) Ranbir

sanamo86 on Friday, November 09, 2012
I agree SRK is world famous for what???? being King of romantic films, not
his quality of acting, Whereas Ranbir although not world famous, has
distinguished himself for his mature performances of his roles