Video of this song from youtube
Average Rating : 4.10
Total Vote(s) : 20
Please rate this song between 1 star and 5 stars (5 stars being the best). Just move your mouse on the stars above and click as per your rating. Your rating will really help us to improve our website. 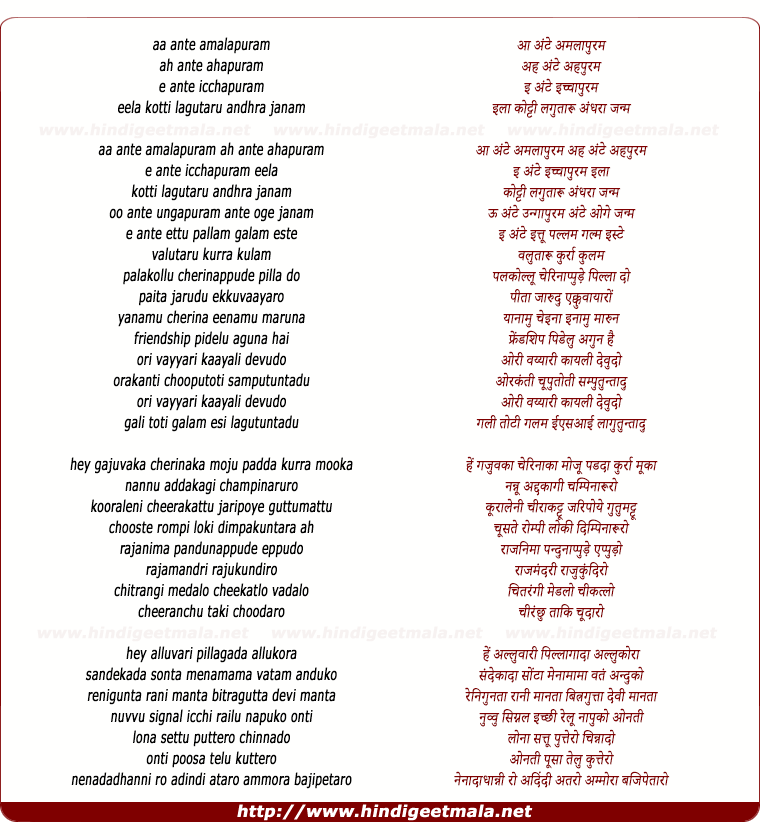 Comments on song "Aa Ante Amalapuram"
orawal on Sunday, October 14, 2012
hahaha...bollywood is much more than the few names you said. And u are
missing my point...remember, I'm not comparing "market share"...I'm
comparing this particular song only (its art, direction, lyrics, vocals,
choreography, cinematography)...south industry is a tiny fraction of the
huge bollywood (and I'm a die-hard Bollywood fan!). I just have strong
reservations abt this particular song. (Another example is "Chikni Chameli"
which was a terrible remake of the Marathi classic "Kombdi Palali")

asis rout on Monday, November 05, 2012
I dont think the Southern market is this tiny you are making it to be.Only
two states Andhra and Tamil Nadu have nearly one third of all cinema
screens in India.A high budget Tamil film like Enthiran or Robot was
released in 1500 screens in Tamil Nadu alone while while Ek tha Tiger was
released in 3300 screens all over the country and compare the number of
Tamil and Hindi speakers.I think the Southern industry is doing a very good
job and there is no point calling someone "baap" or something.

orawal on Wednesday, September 26, 2012
more ppl like the remake simply because most are unaware of the original...think abt it, how many ppl appreciate telegu vs. hindi? an Assamese may not know telegu but he will know Hindi. That's the simple reason why it was "popular".
I'm entitled to my opinion just like u, nd i was stating it...the Hindi version has the same tune, but terrible lyrics...also, the same singer's talent seem wasted in tht one..also filmography & choreography is so much bettr here, the othr one shows a teasin skank

sanamo86 on Saturday, June 16, 2012
Firstly I agree that Maximum version has more western influence, but thats
not the reason why I like it better, overall I find the choreography &
shooting alot more exciting & entertaining & original. I think you need to
realise the reality that the days when dancing on top of a moving train in
a choli have gone. its NOTHING to do with kissing the feet of 'white' men.
Its the Indian men who r the first to look at bikini clad women, NO 'white
man' is making them do it

SHAILUtheINDRA on Saturday, December 06, 2008
Amazing song! The music, the voice, the choreography (beats Dil Se dance to
pulp!), the expressions on the woman's face, everything is simly superb.
Whenever I am down, I play this song for instant rise in energy level :)
btw...I am a Maharashtrian and don't understand a word in this song. But
man I enjoy the song so much! Just like every other catchy Marathi number.
Thanks a lot for the upload.