Video of this song from youtube
Average Rating : 4.40
Total Vote(s) : 25
Please rate this song between 1 star and 5 stars (5 stars being the best). Just move your mouse on the stars above and click as per your rating. Your rating will really help us to improve our website. 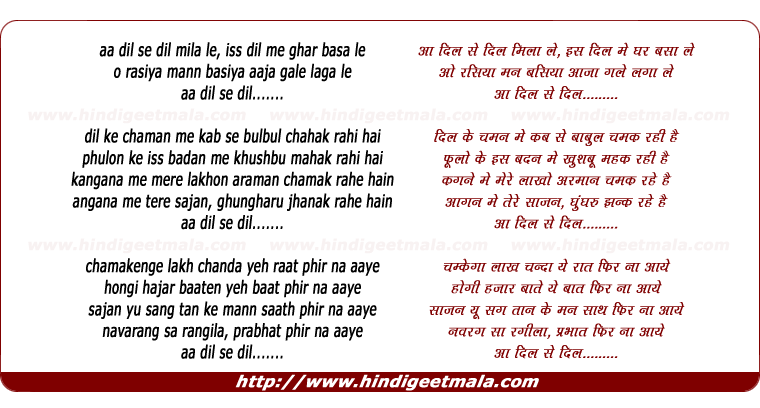 Comments on song "Aa Dil Se Dil Mila Le"
isaac moses on Sunday, December 06, 2009
Navrang was released in 1959 at the new Cinema in Bombay. The Premiere was
a lavish celebration of the Holi Festival with enchanting music by C
Ramchandra & magical lyrics by Bharat Vyas. They were so many outstanding
songs, as colourful resonant compliments, to moving images so aptly
befitting the film title. Navrang & Maratha Mandir were hugely successful
conceived & Inspired by the festive colour and the spirit of Holi, as the
celebrations continued to Asha's 'Aa Dil se Dil Milale'

chandrakishor bhatt on Sunday, July 08, 2012
Ashatai's voice is at an extent seems different , the mode of vocal is
quite distinguished.But good very good.Her this effort is praiseworthy..

neelubird on Friday, November 26, 2010
Thanks for uploading, I really like this song:)
Ashwin Nagakar on Friday, July 06, 2012
I think she is vandana karmarkar
Popular Links on HindiGeetMala