Video of this song from youtube
Average Rating : 4.46
Total Vote(s) : 13
Please rate this song between 1 star and 5 stars (5 stars being the best). Just move your mouse on the stars above and click as per your rating. Your rating will really help us to improve our website. 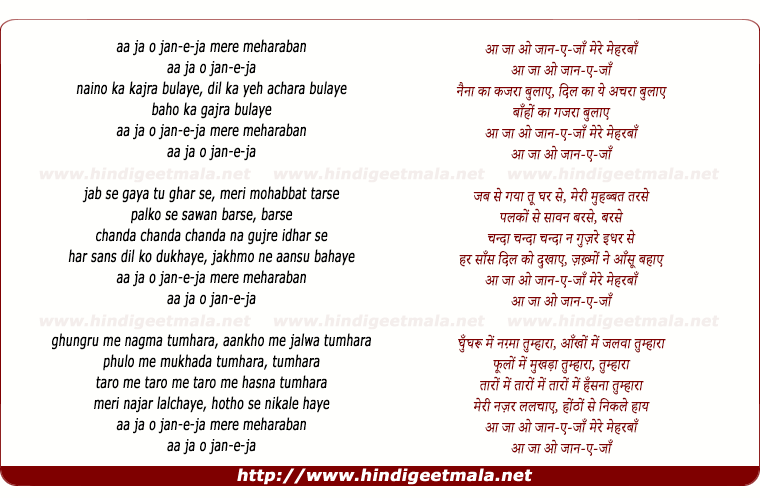 Comments on song "Aa Ja, Janeja Mere Meharaban"
Psyche1954 on Saturday, November 21, 2009
I hope some one notices the voice of Kishori Amonkar as a youngster singing
in Films and that's is a purely classical melody where she was given the
freedom to choose her own Taans! She did not sing again for films till she
did so in a Shekhar Kapoor/Dimple Kapadia film called ' Drishti',in early
90s! 'Geet gaya patharon ne' also has Asha Bjonsle version! No one can
mistake the special Stamp of authority by Kishori Amonkar!She is Atarouli
Jaipur Gharana the foremost Classical vocalist of today!

snehal doshi on Sunday, November 29, 2009
The Lyrics the music and the singer makes this song so sublime. But more
credit goes to the conceptualiser .Shri Shantaram. He was a master of the
visual arts .. look at the choreography perfected within 1 camera shot
only where rajshri keeps moving backward and the others form patterns
behind her. She smoothly exits thru the gap left by them. Rajshris dance
and Kishoris voice have that everlasting impact on our minds whenever we
hear this song.

Psyche1954 on Monday, November 08, 2010
@Psyche1954 Just ignore it! It is a literary reference and in one of our
great epics there is a reference for the great souls falling prey to the
follies of love for their children and promoting them to positions of fame
and fortune which they dont deserve! V Shantaram tried to project/promote
his own daughter ( Jaishree) but she faded away after a just a few films
which were made by her own father

Psyche1954 on Monday, November 08, 2010
@Khwaab I am sure she did receive training in Classical dance.! I am sure
her father made sure that she was trained but Like the mighty Dhritarashtra
Putra/Putri moha is some thing which does exist and no one can deny (That
is the partiality one exhibits towards ones son/daughter) very few are
immune to it on this planet

Khwaab on Saturday, November 06, 2010
@Psyche1954 Good to know! Thank you. Yes, that voice is amazing. One thing
I´ve always wanted to know though is about Rajshree´s dancing background.
But I can´t find it anywhere. Surely, she must´ve learnt at least one
classical dance form? Anybody who knows?