Video of this song from youtube
Average Rating : 4.37
Total Vote(s) : 116
Please rate this song between 1 star and 5 stars (5 stars being the best). Just move your mouse on the stars above and click as per your rating. Your rating will really help us to improve our website. 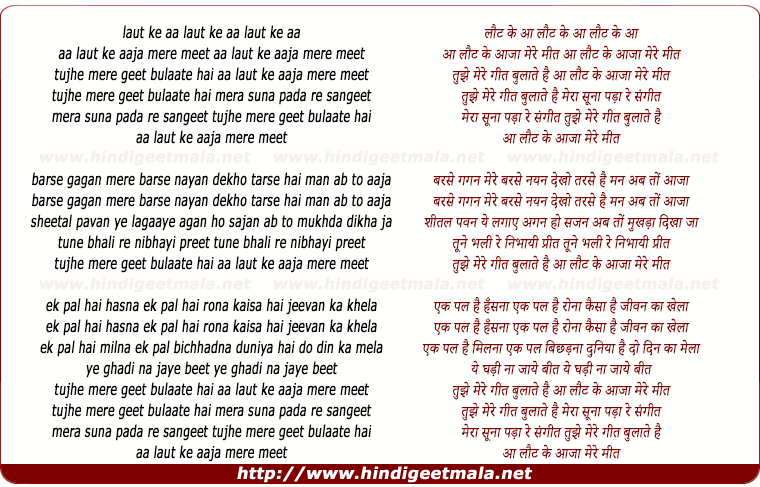 Comments on song "Aa Laut Ke Aajaa Mere Mit"
visanji1 on Thursday, October 15, 2009
Thank you for your kind words. I should like to make clear that during the Kenya African struggle to be free from British rule, there were no attacks on Asians. The struggle was against oppressive land grab laws enacted by white settlers. The British Governor made no attempts to reverse these oppressive laws, except at the end of the struggle. The Africans had no option but to mount an armed struggle. The settlers were not going to return the lands and go away of their own free will!
visanji1 on Thursday, September 03, 2009
Listening to this brings back fond memories of the time I was growing up in Africa. T'was the best of times, T'was the worst of times. Best of times, cos I was 14, and instantly fell in love with each and every girl who gave me a smile! Worst of times cos it was the time of the Mau Mau struggle by Africans for indepence from Britain by Kenya Africans, and news every day was grim. Thank god those days are over, and I have lived a long and happy life!
Mumtaz Khan on Thursday, October 15, 2009
With all due respect, I know the feeling regarding the first part of your
comment, regarding the girls and the smiles, lol. I'm sorry you had to
struggle in Kenya and pleased that you have lived a long prosperous life.
God bless you.

bsbs1986 on Monday, March 16, 2009
hey thnx for uploadin.i think some1 should make a playlist of all the
old classic popular ones so it can be set as autoplay for a pleasant eve, i
cannot recollect so many my parents use to hear years back.really
like them

bbbeachlover on Saturday, July 18, 2009
Amazing track!!! If i made my age mates listen to this kind of
music.they would think im a freak but they sure don't know that old is
gold!