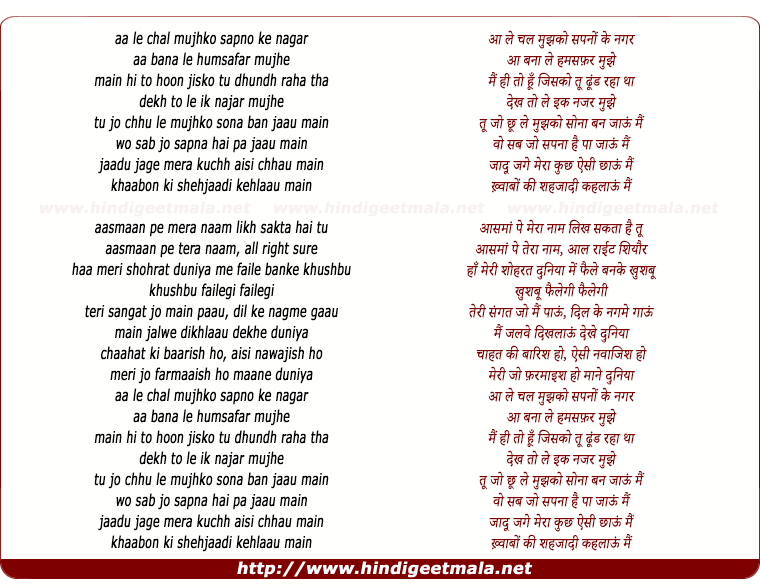 Comments on song "Aa Le Chal Mujhako Sapano Ke Nagar"
HollisterChick891 on Sunday, January 03, 2010
ILove this song!! It has a really good beat!
My BEST FRIEND is a scorpio and they react emotionly to EVERYTHING, so does she (obviously) and since I'm a gemini and we react intelectually to everything, it's VERY amusing for me to watch her like that!

sabbirsa on Sunday, March 06, 2011
@rose4soni its perfectly portrays a scorpios personality. on the surface you see a quiet, shy person. inside however exists a person with full of passion and extreme intensity that very few can handle.
Akash270 on Wednesday, October 14, 2009
Amazing and ver nice song.
Again the best actress is gonna win by our desi girl piggy choops and she deserves this award because she has plays 12 roles in this movie.And she looks like an angel

Sarabjit Singh on Thursday, March 08, 2012
I think it's unfair how this movie made Libras appear to be. We're not that
strict or business orientated; in fact, we're very much the romantics with
bubbly personalities. :)

sabbirsa on Wednesday, February 17, 2010
I loved the girl from Vrischik rashee. So mysterious. She shows sth infront of her parents and is sth completely different at the same time. Thats scorpio for you.
View all 54 comments related to song Aa Le Chal Mujhako Sapano Ke Nagar
Popular Links on HindiGeetMala