Video of this song from youtube
Average Rating : 4.24
Total Vote(s) : 25
Please rate this song between 1 star and 5 stars (5 stars being the best). Just move your mouse on the stars above and click as per your rating. Your rating will really help us to improve our website. 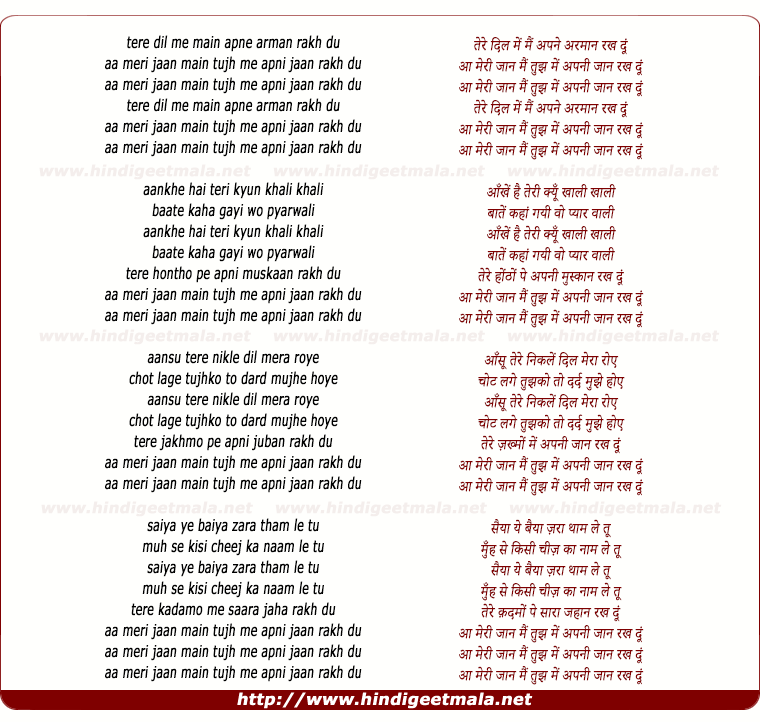 Comments on song "Tere Dil Me Main Apne Arman Rakh Du"
rocky6399 on Thursday, June 11, 2009
hatts of to the movie n the music ..sridevi rocks and shiv hari music dir is awsome
A Youtube user on Thursday, July 08, 2010
Lovely movie. A masters work. SO many human emotions, so wonderfully shown.
Not many people can do what he does. No wonder he is called the King of
Romance in the industry.

TheUnforgettableluv on Tuesday, June 08, 2010
My first indian movie that i saw and i after that i fell in love with Indian movies they are the best romantic movies ;) and the music its beautiful !!
kaythie1 on Thursday, August 12, 2010
This movie is sooo sad:( She was willing to serve him even though he's legs
broke but he kicked her out of his life.. She really loved him.. sooo sad

Limelights1 on Thursday, March 21, 2013
He presented his actresses very beautifully, esp Sridevi and Karishma. They both looked their best in Chandni and Dtph respectively.
View all 45 comments related to song Tere Dil Me Main Apne Arman Rakh Du
Popular Links on HindiGeetMala