Video of this song from youtube
Average Rating : 4.34
Total Vote(s) : 282
Please rate this song between 1 star and 5 stars (5 stars being the best). Just move your mouse on the stars above and click as per your rating. Your rating will really help us to improve our website. 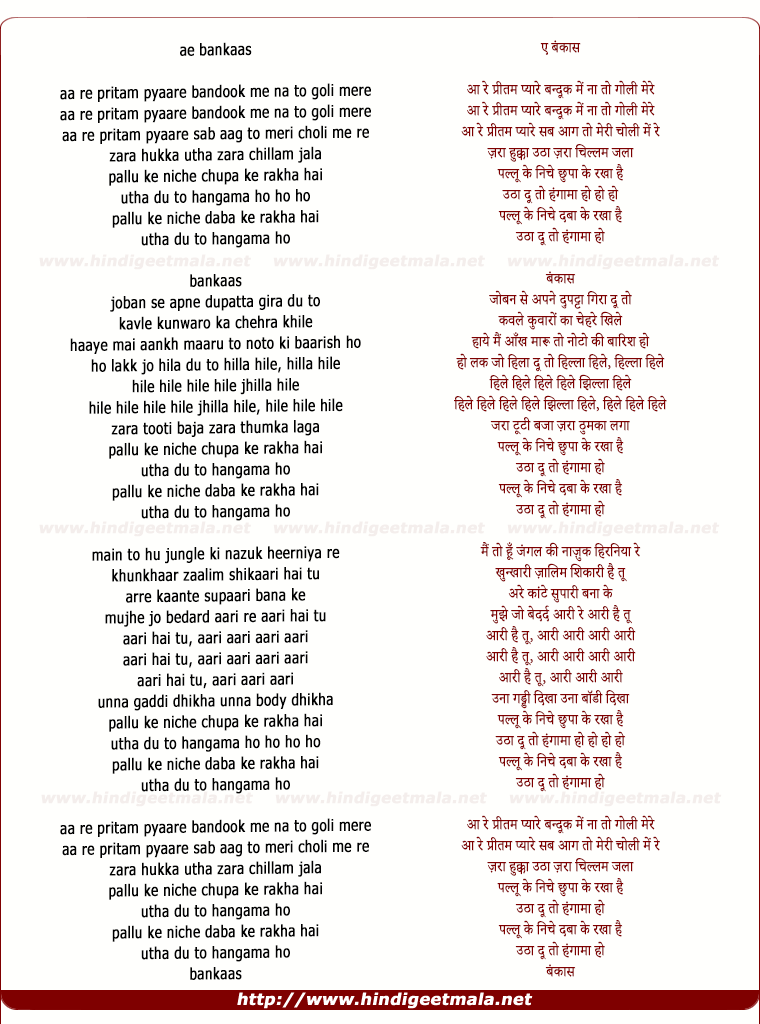 Comments on song "Aa Re Pritam Pyare"
palomasrk on Saturday, June 16, 2012
i know your movies, and i know the action is much better now, and i know
this is a south indian kind of action where like i said people just fly
with just a fit. and even more. and this action of the 80s what made
bollywood a kitch cinema not taken seriously, and loughed at. i love indian
movies but not this , you don't hide about calling this entertainment, you
can as well be intertained with actual real fights. and i am free to
express my opinion, i don't like i don't watch it and i say it.

palomasrk on Saturday, June 16, 2012
you mean because i am not indian i don't have to criticize?i am sorry but
bollywood has become universal wether you like it or not, and more people
are watching and liking or not liking. and have the right as well to
criticize. you do know that some really sensless movies become blockbusters
whereas others which are brilliant are flops. there is a fact that things
have to imporve in indian cinema you just cant' do movies like this with a
similar action. when i saw movies with brilliant fights

avalanche16 on Sunday, June 17, 2012
mindless humor means silly movies where you shouldnt be picky about
anything...its just a movie you watch with your friends and laugh at the
silly theatrics..you dont take it seriously...also you have to realize
which fan base this movie attracts...if a rickshaw driver in india wants to
spend his money on a movie hes not going to want to see a movie like
zindagi na milegi dobara...he would want to see rowdy rathore because it
would appeal to him more

avalanche16 on Saturday, June 16, 2012
agent vinod was a very bad movie...and don tried to copy action from
hollywood movies...is that fine in your books? i personally loved dabaang
because im a salman khan fan, bollywood fan base likes to watch movies in
terms of who the actors in the films are...akshays fans appreciated him in
a role like this so the movie became a hit..like i said this is a masala
genre with sole purpose of being mindless humor

avalanche16 on Sunday, June 17, 2012
where are you from? see i live in America lol...so im able to enjoy all
types of bollywood movies really..but yeah the masala genre will continue
to exist for that fan base...it will get better though, have you seen the
movie rockstar with ranbir kapoor? now that movie was pretty original and
it was appreciated as well...bollywood has alot of potential and talent
which will only go up so have faith!