Video of this song from youtube
Average Rating : 4.27
Total Vote(s) : 1773
Please rate this song between 1 star and 5 stars (5 stars being the best). Just move your mouse on the stars above and click as per your rating. Your rating will really help us to improve our website. 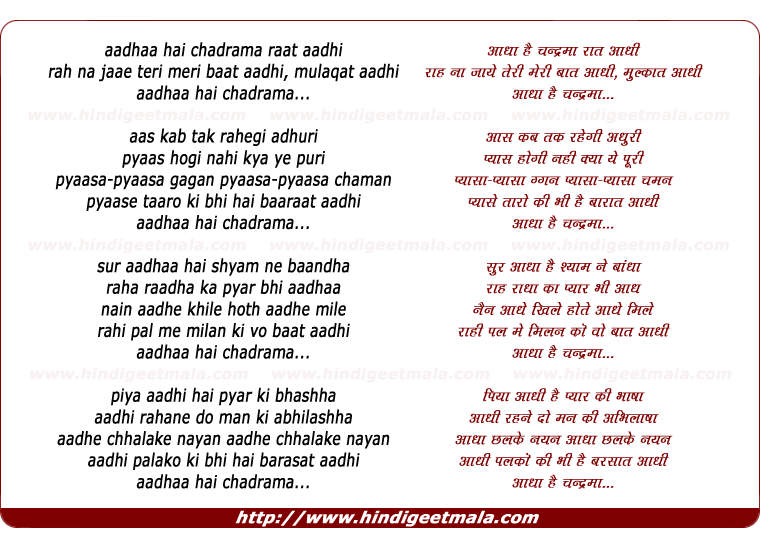 Comments on song "Aadha Hai Chandrama Raat Aadhee"
qiron on Thursday, March 19, 2009
I am aware that this "balancing the pots" is one of Indian folk dances, but
I dont see why she could not take them off her head, midway into the song.
Unless showing her prowess was the purpose. In that case a beautiful,
romantic song is wasted whereas it could be a totally romantic experience
for the viewers. The song did not match the dance or vice versa. The colors
& picturization was good. I love this song, but was dissappointed with the
way its picturized. Thank you for the upload.

qiron on Monday, March 23, 2009
I agree 100%. Yes I am also aware of McCauley's evil plot. I am very much
believer of the Indian school of thought and way of life. I am passionate
about movies, Indian movies included. I have seen all of V.Shantaram's
movies and I have tremendous respect for him as a Great Showman of his
time. I profusely apologize if my comment inadvertently seems insulting,
that was not my intention. I also thank you for your point of view, I
appreciate it very much.

anuj127in on Friday, November 06, 2009
Asha Bhosle and Mahendra Kapoor. Most documents indicate that this song was
Kapoor's first song in Bollywood, not sure if it meant Hindi song or very
first playback of his career. Asha Bhosle should also be remembered because
of the songs of Navrang and not just Naya Daur which supposedly
kick-started her career.

Rayan Khan on Wednesday, April 02, 2008
I guess, as intended by V Shantaram, the visual is rather overwhelming. To
point it actually sort of distracts the song and becomes the USP of the
song itself since the pots on her head do not really contribute to the song
itself but only the dance and the visual of the overall piece.

Eswar Nakka on Monday, September 12, 2011
VERY MELODIOUS SONG. THE DEBU DUET FOR MAHENDRA KAPOORJI WITH ASHAJI. I
READ THAT, AFTER LISTENING TO THE SONG AT RECORDING, SANTARAMJI WAS SO MUCH
IMPRESSED HE DECIDE TO SHOOT THE SCENE IMMESIATELY AND DONE IT IN VERY FEW
TAKES. THANKS FOR LOADING THIS SONG BLESSINGS-MAHES