Video of this song from youtube
Average Rating : 4.28
Total Vote(s) : 36
Please rate this song between 1 star and 5 stars (5 stars being the best). Just move your mouse on the stars above and click as per your rating. Your rating will really help us to improve our website. 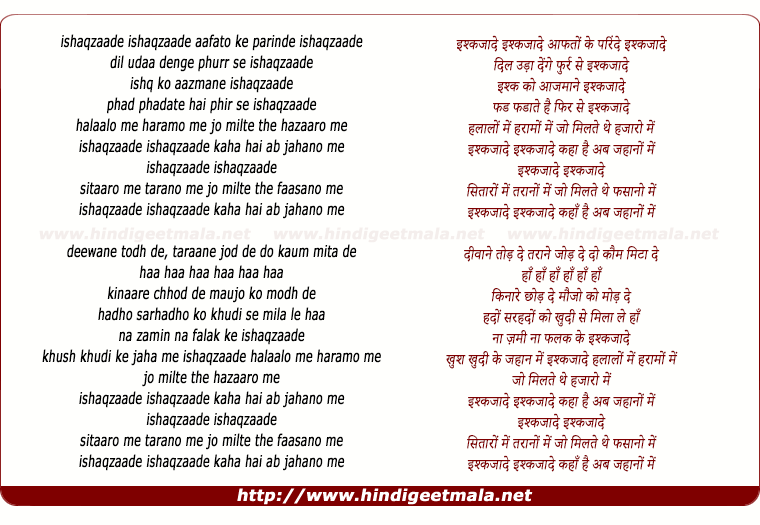 Comments on song "Aafaton Ke Parinde"
PrincessRamsha999 on Sunday, May 06, 2012
Excuse me? Winning a beauty pageant makes you a good actress. I think
Priyanka is a fantastic actress and I don't like her after her surgeries,
but Parineeti is sweet, down-to-earth, honest and an AWESOME actress. After
her cute, bubbly, vivacious character in LVRB, she's suddenly changed into
this intense, meaty, tempestuous person... I think the versatility and
acting progress is more promising than Priyanka's was in the beginning. As
time passes, she may go higher than PC, who knows?

Arun John Varughese on Sunday, May 13, 2012
I got a bad feeling about this film. I could expect the next (Y )gen to use
guns when ever they want. And there will be a time in India where children
get hold of guns and use them against others at schools for silly reasons..
This as you know at this very moment is happening in US. Either these guys
(directors) do not know important and powerful this entertainment industry
is or they are just ignorant just for the sake of making money and fame.
Jai Hind !

Anuj Bhatnagar on Monday, April 23, 2012
dude...dubstep is a genre of music...just because both songs belong to the
same genre doesnt mean one is the copy of another...and even if you listen
to both songs, there really is no similarity. both tracks are kickass..

Sagar Kulkarni on Sunday, June 17, 2012
i agree that she is brilliant but i dont think we need to compare two
actresses at this stage. she is still new, but yes, parineeti has a long
way to go and she has shown a lot of maturity with her work.

gladitsmonday on Saturday, April 28, 2012
lol just because someone won a beauty pageant doesn't mean they are a
better actress than someone else. I think Priyanka is a decent actress and
very gorgeous, but Parineeti is really promising as well!