Video of this song from youtube
Average Rating : 4.71
Total Vote(s) : 35
Please rate this song between 1 star and 5 stars (5 stars being the best). Just move your mouse on the stars above and click as per your rating. Your rating will really help us to improve our website. 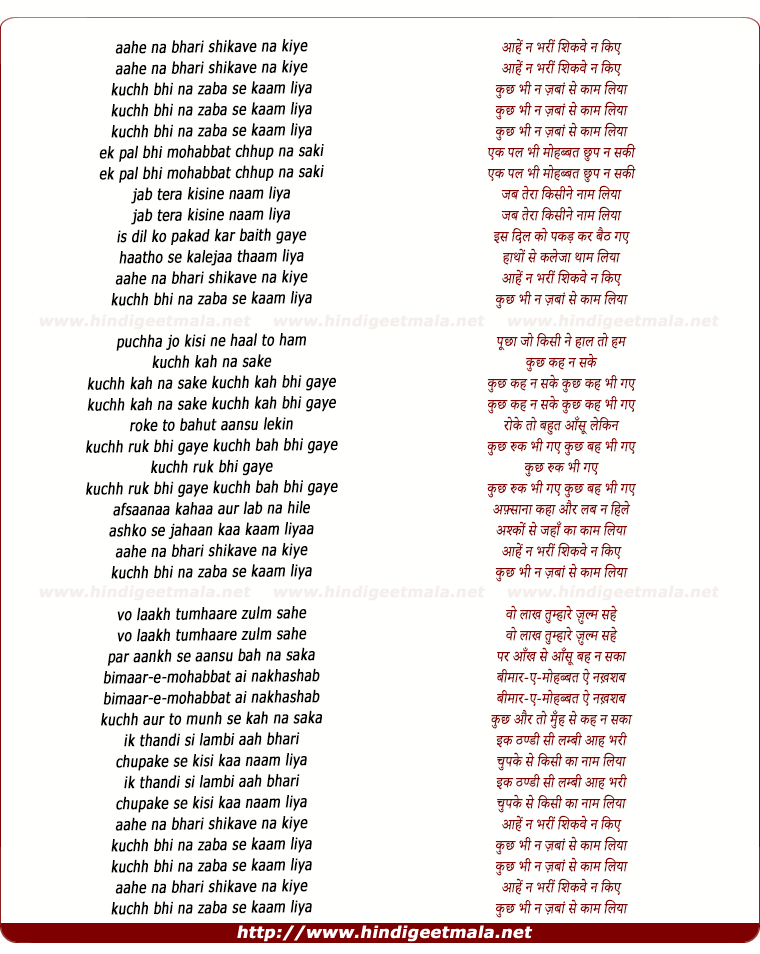 Comments on song "Aahen Na Bharin Shikave Na Kie"
orientlover1 on Sunday, April 03, 2011
At 1:07 and 1:15 you can see (late) dancer Cuckoo. Young girl ( wearing a cap )sitting behind Rehana and Shashikala at 1:28 to 1:32 then again at 3:06 to 3:08 and 3:45 to 3:52 is Khurshid Akhtar who will later become famous actress under screen name Shyama. She was about 10 years old at that time. She was selected by Shaukat Hussain Rizvi, Director from a group of extras. It was her first movie appearance.
Rajesh Kochhar on Saturday, August 04, 2012
Milahi1935 is right this is certainly the best qawwali in female voice. I
would rank it as one of the three best all time film qawwalis. The other
two : Hamen to loot liya mil ke husnwalon ne; and Na to karvan ki talaash
hai.

Milahi1935 on Tuesday, September 27, 2011
The highest moorkian were given by noor jahan, showing her range as well as
control. All three sang very well. The sheer happiness on the faces of
every girl shows how much singing was enjoyed in our culture.

Milahi1935 on Tuesday, September 27, 2011
The range at which this qawwali is sung should be noted. It is the best
qawwali sung by females, and probably better than many qawwalis sung by
males.

Vidur Sury on Sunday, September 12, 2010
This Qawwali and the one from Village Girl (1945) which you uploaded too
(thanks!) are the best film Qawwalis.