Video of this song from youtube
Average Rating : 3.87
Total Vote(s) : 15
Please rate this song between 1 star and 5 stars (5 stars being the best). Just move your mouse on the stars above and click as per your rating. Your rating will really help us to improve our website. 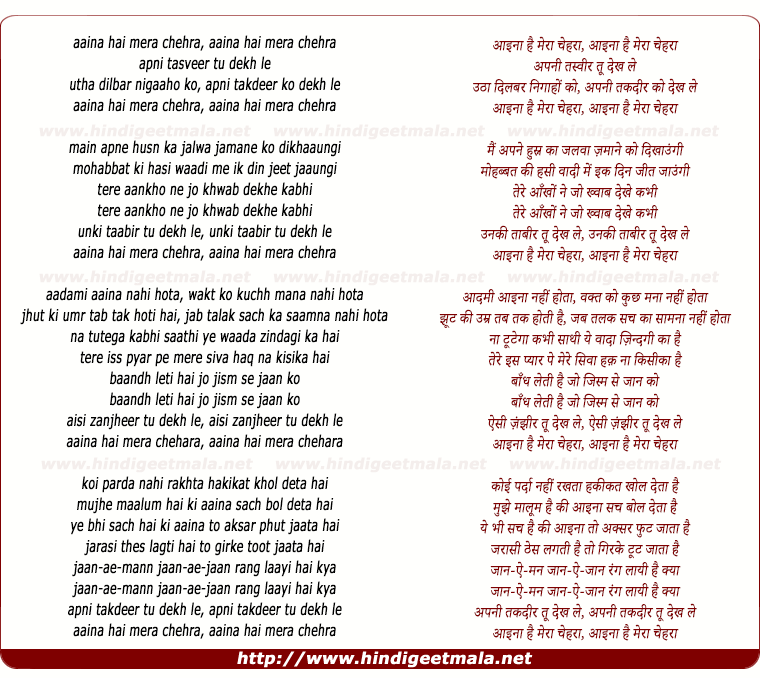 Comments on song "Aaina Hai Mera Chehara"
answers192 on Sunday, April 17, 2011
Amrita lookslike one of those trash white women who learn a bit of hindi and start dressing up in sarees to impress indian men and end up looking more trashy, nothing suits them, they can make a wonderfull outfit look trashy, i am with juhi all the way, yes, a lie only lives till truth comes out...
MukeshPandya1985 on Wednesday, March 14, 2012
@0433306100 nah, every guy and girl is different. if those type of guys are
liked by girls then why is there someone below saying she doesnt like guys
like that lol. girls prefer guys who know what they want and stick to it.
no moral guy would like an unloyal girl, and no moral girl would like an
unloyal guy. If unmoral and unloyal people attract each other then let them
lol.they will suffer in the end and it will come back around on them.

Jitesh Patel on Saturday, September 10, 2011
@lostsoul324 Those types of guys are liked by girls and that is why even
though they know that the guy is with someone, yet they go for them. Guys
arent going to turn it down coz then that would silly...lol...Girls are
meant to be loved ;-)

mibousbogf on Wednesday, September 29, 2010
@lostsoul324 in this movie, if you watch to the end something else is going on ;) and yeah its a lovelt song even though you do have that element
BusyRiz on Sunday, April 10, 2011
I am selling the original soundtrack CD to this film 'Aaina' (EMI, made in
UK) if anyone would like it.