Video of this song from youtube
Average Rating : 4.51
Total Vote(s) : 67
Please rate this song between 1 star and 5 stars (5 stars being the best). Just move your mouse on the stars above and click as per your rating. Your rating will really help us to improve our website. 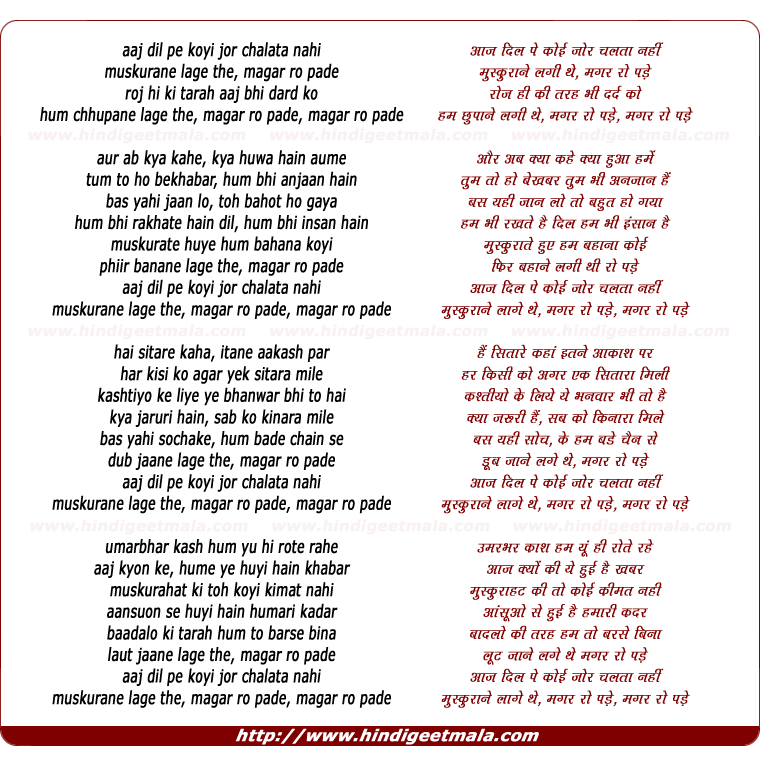 Comments on song "Aaj Dil Pe Koyi Jor Chalata Nahi"
Narender Soni on Tuesday, March 26, 2013
Amazed to know that you heard this mesmerizing song of Lata Ji for the
first time. If such is the case then I would like to share one more
beautiful song of Lataji with you. Find the link - "Hum hain
matay-e-koocha, uthati hai har nigah kareedaar ki trah" from film "Dastak".
All the gazals/songs of DASTAK are mind blowing.

RealMusicKing on Thursday, December 23, 2010
A very beautiful melody. The best from the film Milan. This was either not filmed or if filmed, taken out of the movie.
Chandrakant Trivedi on Monday, April 29, 2013
This is my favorite song of Milan (1966),play-backed by Lataji, picurized
on Nutanji..The meaning of its all antaraes will bring tears in your eyes
and will touch to your heart.Lataji is real a Bharat-Ratna and Goddess of
Music and SaraswatiI salute lataji for her melodious voice.Unfortunately
this song is removed from movie Milan This song is hindi version of Telugu
song "Maanu maakunu kanu / Manu makunu" from telugu film " Mooga
Manasulu"..It is also popular song.

goswamiirani on Sunday, August 14, 2011
She is the incarnation of the Goddess Saraswati Herself!!!!!!..and can never be an ordinary human soul !!!!
She's the 8th wonder of the world!!!!
This song has always been my most loved numbers from the film Milan, but maybe this song was not filmed in the movie.and God knows why!! This is the best song of the movie, anyday...