Video of this song from youtube
Average Rating : 4.47
Total Vote(s) : 77
Please rate this song between 1 star and 5 stars (5 stars being the best). Just move your mouse on the stars above and click as per your rating. Your rating will really help us to improve our website. 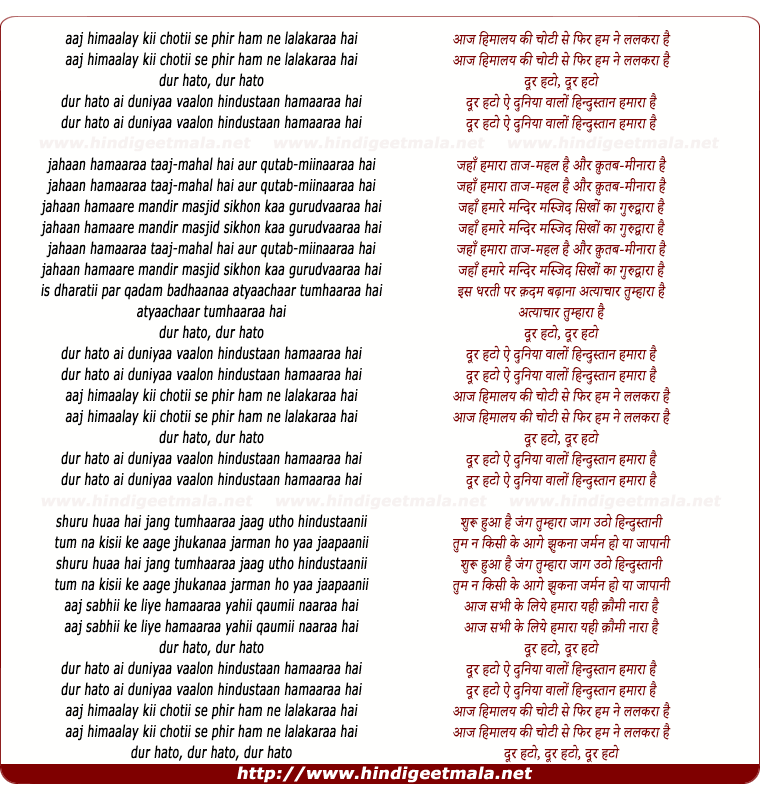 Comments on song "Aaj Himalay Ki Choti Se"
deepaksgulvadi on Sunday, March 15, 2009
I was searching for the video of this song since a long time. Truly
inspiring. The music composed by Anil Biswas and lyrics by Kavi Pradeep.
One should realise that the film was made and released during the British
rule & hence these words were added "Tum Na Kisike Aage Jhukna German Ho Ya
Japani " to fool the British (Second World War was on) Thanks a lot & God
Bless You. Please post more of such rare songs.

Dilip Kapasi on Sunday, March 15, 2009
Thanks for your comments. Truly I feel the same as you did. India should
not be intimitated by others, and these were thought even then, in 1940s. I
wish to choreograph this song with new players and probably the same
settings. Any ideas? I live in Houston, Texas

Dilip Kapasi on Thursday, August 20, 2009
I am so happy that someone so far away from India loves this song and
recommends to hear it everyday. I agree totally. Mumtaj Shanti is the
actress in Kismet. I have Kismet in VHS but not in DVD. I am sure one can
get it in Mumbai, India.

Dilip Kapasi on Thursday, November 20, 2008
Thanks for your response. I love this song as it speaks of the pain of
division of India.. Truly those must be very bad days for people, though I
realize the song is a good spirited one..Thanks Dilipjee

Dilip Kapasi on Tuesday, December 09, 2008
Please do not throw that record away. If you have a list of all his
records, please send me the list. I am always looking for old songs..Thanks
for your comment.