Video of this song from youtube
Average Rating : 4.28
Total Vote(s) : 133
Please rate this song between 1 star and 5 stars (5 stars being the best). Just move your mouse on the stars above and click as per your rating. Your rating will really help us to improve our website. 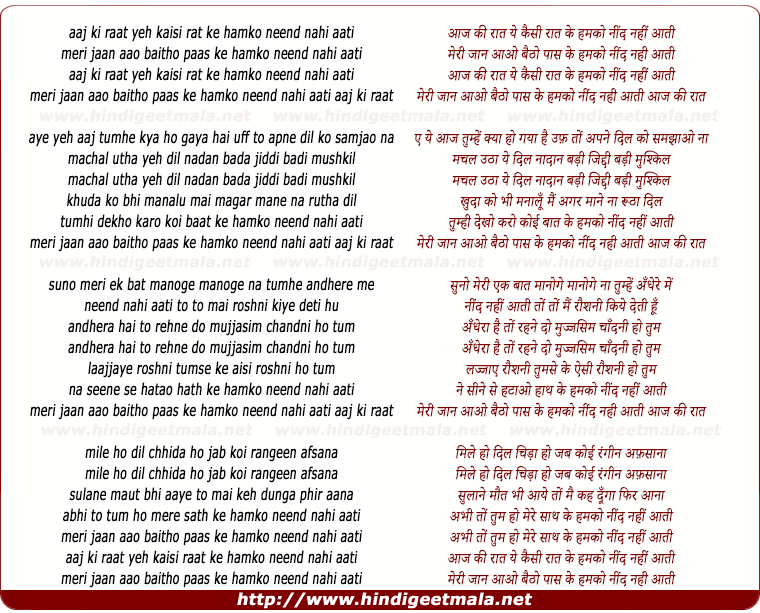 Comments on song "Aaj Ki Raat Ye Kaisi Raat Ke Humko Nind Nahi Aati"
Tony Mohanty on Monday, January 18, 2010
During shooting of this film in 1969, Saira was busy in completing her
already signed films. So she lived far away from Dilip Kumar who was 47
then. She was having a really hot & romantic time with her paramour
Dharmendra. Saira exposed her entire body (including her V.A.G.I.N.A) in
SAAZISH. She was spending time in the locations wearing bikinis, shorts &
bra roaming around in the hotel, sea-beach with Dharmendra who used to
tightly hold the stunningly gorgeous Saira like his wife.

Tony Mohanty on Saturday, February 13, 2010
Saira Banu & Dharmendra were never in love. They enjoyed the physique of
each other. Saira used to get immense pleasure to be F.U.C.K.E.D by
Dharmendra and Dharmendra was extremely fond of Saira's Milky Complexion,
Beautiful Face & Figure and Ultra-modern Mannerisms.

vigrot on Tuesday, May 13, 2008
A very beautiful song.The golden voice of Rafisahib is astounding.I love
the filling by the mandolin or the guitar. Can anyone tell me who played
those lovely filling pieces inbetween.The music was by Shankarjaikishan.

ansab1 on Saturday, June 21, 2008
This is the forgotten side of Mohd Rafi sahib - this song shows up the
1960's for what they were - a time of romantic music and romantic voices -
in this romanticism - Mohd Rafi's voice was the KING of them all !

Tony Mohanty on Saturday, February 13, 2010
Yeah. Off course. But in those days she was independent to the extent of
choosing his favorite men such as Dharmendra & Joy Mukherjee to simply have
momentary pleasure from physical relationships.