Video of this song from youtube
Average Rating : 4.46
Total Vote(s) : 28
Please rate this song between 1 star and 5 stars (5 stars being the best). Just move your mouse on the stars above and click as per your rating. Your rating will really help us to improve our website. 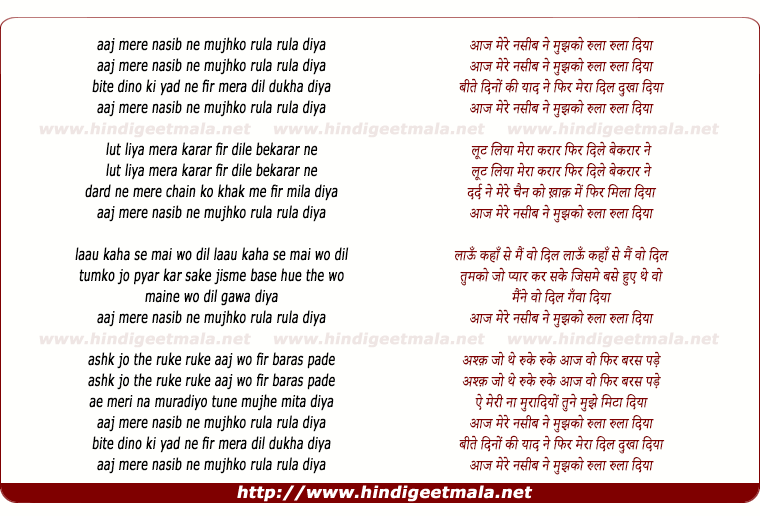 Comments on song "Aaj Mere Nasib Ne Mujhko Rula Rula Diya"
Surender Bhutani on Wednesday, March 06, 2013
Here is a composition that can surprise any great composer. Sajjad's genius
is self-evident. I wish if he had composed for more films in his life. Only
14 films from 1941 to 1965. Even Lata used to be scared of him when he told
her," Lata Bai, theek dhang se gaiye. Ye Naushad Miyan ki dhun nahin hai "
Dr Surender Bhutani Warsaw (Poland) suren84in@yahoo.com

myvision22 on Monday, January 16, 2012
It is a typical Sajjad Hussain tune.The beauty of the song cannot be described in words!!! It is just ethereal..One of my favourite songs of Lata ji..everything about this song is just so special!! lyrics and composition!! ..what a nice song !
... It permeates deep into the soul. makes you nostalgic.
Mukhtar

Yp Sharma on Saturday, August 08, 2015
Beautiful song by Lataji and tune by Sajjad Hussain I listen this song at
leat 5 times a day and dont know how long coz it is such a melodious song
Thanks Basheer ji uploading this song﻿

Harjap Aujla on Sunday, September 15, 2013
This is one of the greatest songs ever sung in Hindi film music. The music
is composed a no nonsense music director Sajjad Hussain.

Vijay Kumar on Sunday, August 03, 2014
What can one say but listen and admire this beautiful melodious song.
Lata's voice is pure magic.﻿