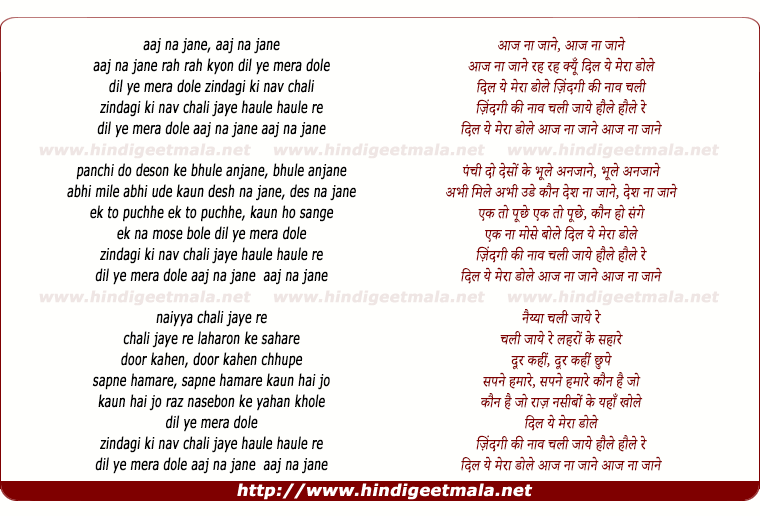 Comments on song "Aaj Na Jaane Aaj Na Jaane"
Bharat Gul on Thursday, December 22, 2011
Like a specially delicate rosebush in a garden, this song constantly
beckons one to come back to it. Listen to the voice at 0:58-59 and then
again at 1:49-50, when there's a fractional pause and the words are
repeated.That feature in this CR melody melts one's heart. And truth be
told, one also wants to sneak another peak at the rosebud-like face of
Padmini !

S Qasim Hasan Zaidi on Monday, December 05, 2011
@BharatGul The sweet voice of Lata and beautiful music of C. Ramchandra
have created a magic. S.S. Vasan has framed Padmani in a close up view
brilliantly. Her smiling heart, sparkling face, glittering eyes and
marvelous acting are creating a mystery which is so gripping for the
viewers. A lovable, romantic song. Thanks Bharat Gul Ji for sharing.

Bharat Gul on Monday, December 05, 2011
As always, it's a joy to listen to Lataji and to see the beautiful and
super talented Padmini, one of the apsaras of old Bombay cinema. The
sometimes animated, sometimes far-away look in Padmini's eyes expresses
with perfection the emotions of a woman coming to terms with the love
budding inside her. Thank you for the post.