Average Rating : 3.50
Total Vote(s) : 2
Please rate this song between 1 star and 5 stars (5 stars being the best). Just move your mouse on the stars above and click as per your rating. Your rating will really help us to improve our website. 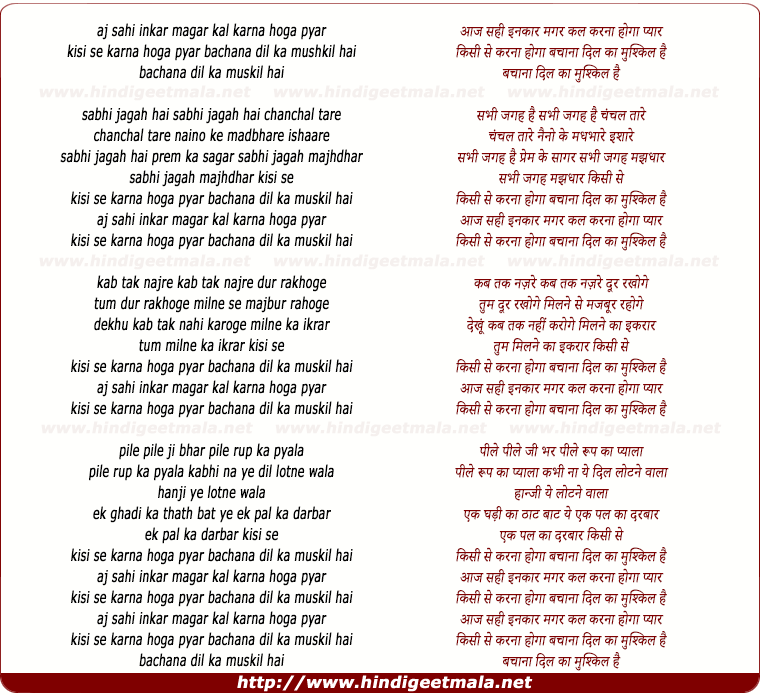 Comments on song "Aaj Sahi Inkar Magar Kal Karna Hoga"
Bharat Gul on Wednesday, January 19, 2011
Aren't such songs with their "period flavor" special? One may see that as
a function of the old recording technology or of the simpler yet utterly
captivating compositions by such greats as Pankaj Mullick, R.C. Boral and
the like. One wants to keep that feeling by listening to them only now and
then lest they should become too familiar and lose that mystique. It's like
having rare peeks into an art museums' precious archives. Thanks, Deepak.

deepaksgulvadi on Wednesday, January 19, 2011
@BharatGul Thanks. I agree that such songs should be played rarely so that
they don't become too familiar. But if you ask me, the more one listens to
these songs the more one gets enchanted to them. Its a pity that such songs
are not written,neither such music made.

deepaksgulvadi on Wednesday, January 19, 2011
@derubala Thanks to oldHFMfan who corrected me. I had mentioned the singer
as Geeta Dutt. I stand corrected.