Video of this song from youtube
Average Rating : 4.39
Total Vote(s) : 41
Please rate this song between 1 star and 5 stars (5 stars being the best). Just move your mouse on the stars above and click as per your rating. Your rating will really help us to improve our website. 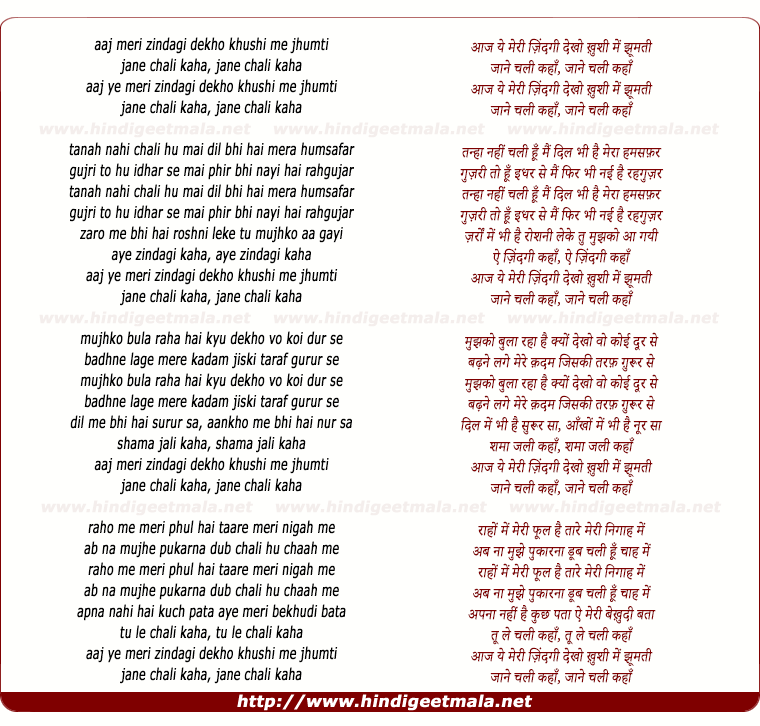 Comments on song "Aaj Yeh Meri Zindagi Dekho Khushi Me Jhumti Jane Chali Kaha"
Indu Puri on Wednesday, October 02, 2013
Ye Raaste Hain Pyaar Ke was based on a true incident,namely the case of K M
Nanawati,The Nanawati Case was far ahead of its time and Hindi movie
audiences were not prepared for a movie telling this kind of tale. So the
movie did not do well at the box office though the real lfe Nanawati case
itself was followed by people with great curiosity. Most of the songs of
this movie were sung by Asha Bhonsle and she did a wonderful job.

Sri V on Wednesday, April 15, 2015
Leela Naidu was born to Dr. Pattipati Ramaiah Naidu, a well known nuclear
physicist from Madanapalle, Chittoor Dist., Andhra Pradesh, She was
featured in the Vogue in the list of 'World's Ten Most Beautiful Women',
made Andhra , India proud :) , she is also relative of Sarojini Naidu from
her father\s side :)﻿