Video of this song from youtube
Average Rating : 4.19
Total Vote(s) : 274
Please rate this song between 1 star and 5 stars (5 stars being the best). Just move your mouse on the stars above and click as per your rating. Your rating will really help us to improve our website. 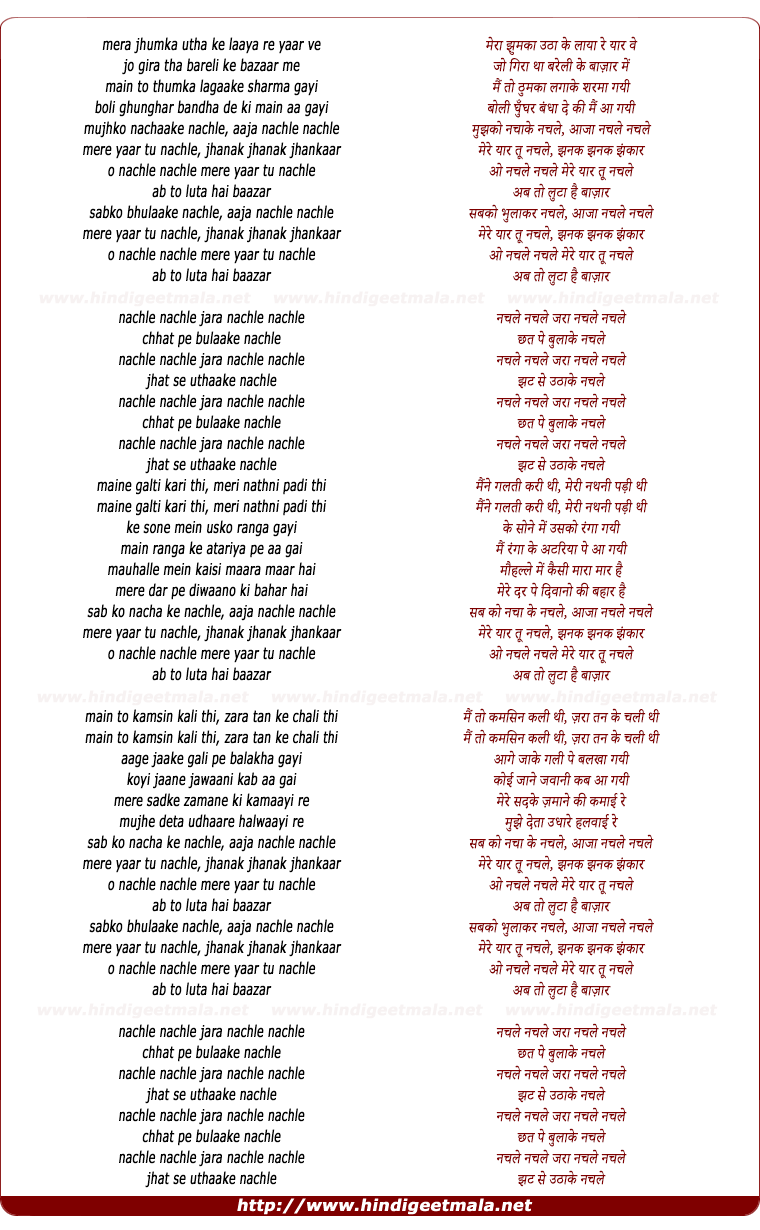 Comments on song "Aaja Nachle Nachle Mere Yaar Tu Nachle"
ind paedia on Wednesday, April 15, 2015
Dear YRFilms
As India's biggest film production house we expect precise credits from
you. (Saregama RPG is normally precise) ALL songs from aaja Nachle posted
by you on YouTube have the following credit: 'Lyrics: Jaideep Sahni &
Piyush Mishra' Does that mean that ALL songs of the film have been jointly
written by Jaideep Sahni & Piyush Mishra. There is total confusion on
various websites on this count reg aaja Nachle. Some responsible sites
credit Mr Beg as the third co-writer. Can you give the name of the lyricist
of every song SEPARATELY?﻿

Sonia Notani on Tuesday, January 27, 2015
They changed a line in the song and I agree it may have been offensive for
some people, but I don't think it was a big reason enough to declare the
movie nonsense or a flop! I loved the movie!
Just because of a line you can't critisize the efforts of the actors,
choreographers, directos, scriptwriter, and every other person involved
behind the work!
Great job team! You did an amazing job!
There are so many other songs with weird and inappropriate lyrics...this
one was nowhere near compared to those﻿

veera ramana on Monday, September 03, 2012
sharuk,salman heros bt not great and beautiful dancers like MADHURI.Is it
not.Their films r big proofs.Being a beautiful dancer MDIXT shud work with
such powerful heros who r LEGENDs in dances,(expession,face,eyes,moves,cute
turns & many things r needed) to steal ppl attention.Do they(salman,sharuk)
hav such SKILLS.No way.Just normal average dancers.They were not Legends in
dances.She chooses such heros who r weak in dances.So she gets total credit
of songs.Bcaz the said heros wil do nothing.

giriisindahouse on Saturday, October 23, 2010
@ggameon you forgot the very essence of Bollywood dances. Its not just the
dance coz every song has a story, otherwise just put in some performer in a
night club and he'll dance better than all other Bollywood actors. The
expressions and emotions are a huge part of it and no one expresses
countless expressions in a second like Madhuri, just follow her face not
her body. People say Big B is a great Bollywood dancer, but he barely
moves! That's coz he expresses it in every step.