Video of this song from youtube
Average Rating : 4.43
Total Vote(s) : 91
Please rate this song between 1 star and 5 stars (5 stars being the best). Just move your mouse on the stars above and click as per your rating. Your rating will really help us to improve our website. 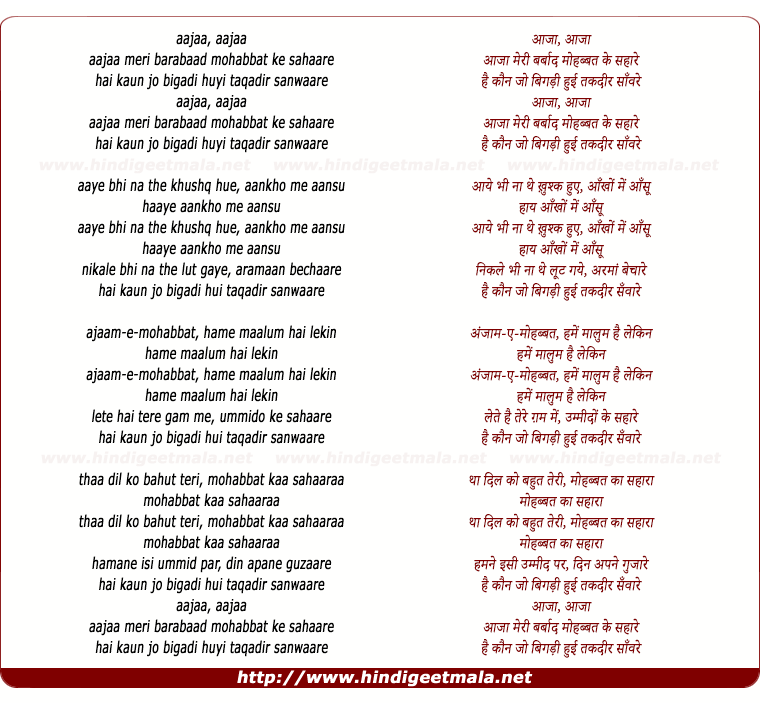 Comments on song "Aaja Meri Barbad Mohabbat Ke Sahare"
RituPM :) FEELThePurityPeace&DepthINMusicINYourShr on Saturday, February 12, 2011
Wow! What a perfect opening & a perfect closing! From the dramatic opening
moment of her frantic expression of realizing he's leaving, to "giving up"
in an angst-ridden expression as she languishes back to the Piano, in
closing! Heartrending Song! Captivating Voice "defining" the emotional
realism of a woman pleading in anguish to her beloved to care for her
feelings & come! All done with matching lip synchs & excellent collage of
film clips by the creative genius on YT, Mukhtar! Bravo! 12FEB11'

P.K. ANILKUMAR ( HINDI MELODY BYTES ) on Wednesday, September 16, 2015
The song describes the anguished feelings of a woman when her beloved is
leaving or giving up. She is requesting him, in her agony-ridden
expressions, to come back”.

Noor Jahan's voice is like the sounds of the purest crystals; such a
fantastic voice is never heard again. We should be grateful to Naushad
sahib who have created great melodies for the movie Anmol Ghadi and
preserved this fascinating and enthralling voice. The lyrics of this
mesmerizing song are written by Tanveer Naqvi.﻿

jasbongy on Sunday, February 13, 2011
Mukhtar Bhai, thanks a lot for spreading joy on Y.T. with your excellent
videos/songs. Noor Jahan Ji sings brilliantly in her unique,melodious voice
with right feelings of Dard. Your favorite Madhubala Ji and Dilip Kumar Ji,
the handsome pair of Film World are very very soothing to eyes.Madhu Ji the
unmatchable Beauty Queen with her brilliant facial expression and beauty
looks out of this World. I salute you for your very creative,enjoyable
video. Thumbs Up. With Blessings and Love. Didi,

madhubala2009 on Friday, February 11, 2011
Both of your fantastic clips do right to this song,that in the original is on Noor herself who just lies on a sofa,worrying-with that immortal voice of hers!But your first version is (IMO)much more expressive and fetchingly composed than the original;very fluent and natural.The second clip is even more dramatic,its diction even more fitting.The flashbacks tell more about the lovers' story.The first version seems better balanced to me,though.Wonderful and too difficult to choose!no space:)
saz9297 on Thursday, March 03, 2011
mukhtar saheb. your efforts replacing noor jahan to dilip kumar/madhubala
is ofcourse admirable. it looks like they were in the film Anmol ghadi
instead of Noor jahan/surrendra. your note about crystal voice of her, i
100% agree but only till her songs in intezar, dupatta, gulnar, koel etc.
later.. i don't hestitate to say, rest were ''phatta baja'' (not
necessary to agree with my views). anyway i fully enjoyed with the vdo that
you fit dilip/madhubala. regards