Video of this song from youtube
Average Rating : 4.64
Total Vote(s) : 28
Please rate this song between 1 star and 5 stars (5 stars being the best). Just move your mouse on the stars above and click as per your rating. Your rating will really help us to improve our website. 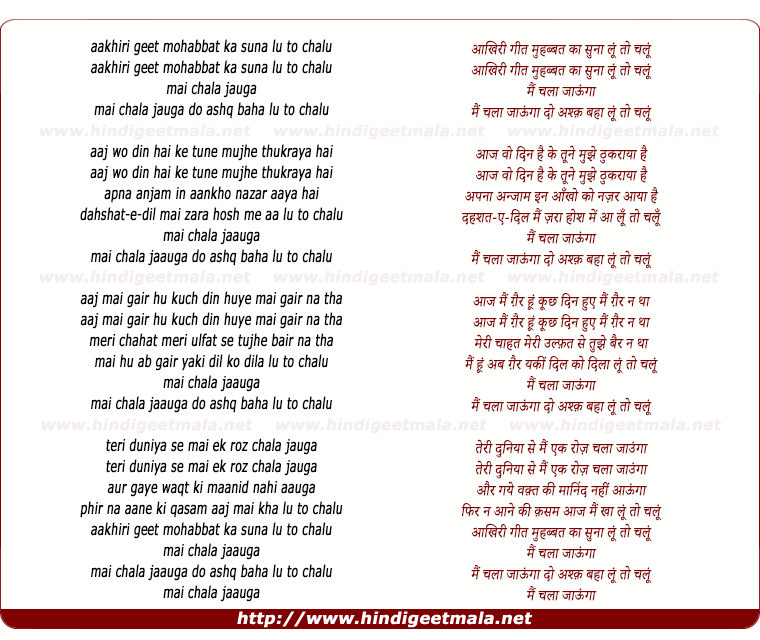 Comments on song "Aakiri Git Muhabbat Kaa Sunaa Lun To Chalun"
PONNADA SRINIVASPRASAD on Sunday, February 16, 2014
only Rafi could deliver such melodies with intensity and from the bottom of
heart and is testimony of vocal prowess and contemporaries such as Mukesh,
Kishore, Mahendra, Manna dey are little match. Indubitably, Rafi has been
gifted with versatility, melody, range, depth and strong vocals coupled
with good heart and delivery style, Union Government failed to recognize
this SON OF THE SOIL from Film firmament.﻿

PONNADA SRINIVASPRASAD on Monday, October 28, 2013
this melodious song is proof, evidence, if any required, to emphatically
confirm, claim Rafi saab has been greatest legend, legend among legends,
champion among champions, stalwart, music giant and English language
adjectives are inadequate to admire, acclaim, aver, adduce Rafi sahib's
supremacy and his control, assimilation of Hindi Music AND what
not!!!!!!!!!!!!!!!

Inatsikap on Wednesday, July 18, 2012
You will never find another that poured his heart and soul into a song like
Rafi Saab. Listen to the deep emotion making the work of the actor even
more easier. Dhramendra's favourite singer Rafi Saab.