Video of this song from youtube
Average Rating : 4.38
Total Vote(s) : 308
Please rate this song between 1 star and 5 stars (5 stars being the best). Just move your mouse on the stars above and click as per your rating. Your rating will really help us to improve our website. 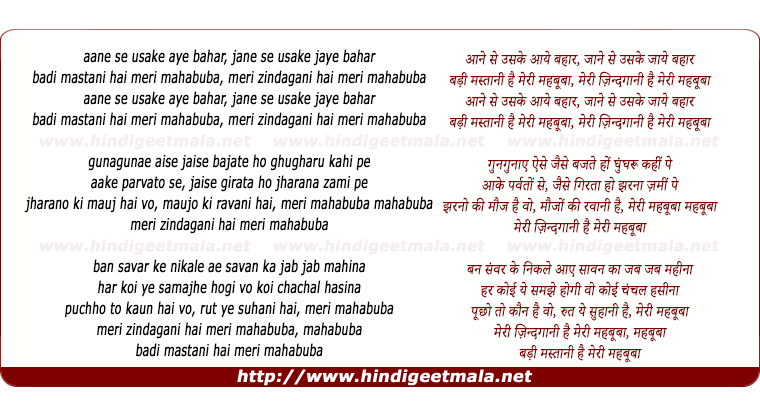 Comments on song "Aane Se Uske Aaye Bahar"
Pepe Chareetur on Saturday, February 26, 2011
@deft8touch Jeetendra is happy to be going home after graduating from the
university. He is married and father of three children. As the story
unfolds he goes looking for employment in the village but is unsuccessful.
He leaves the village to seek employment in town. He meets with ailing
Tanuja and he lies to Tanuja's father that he's not married. Tanuja falls
in love with him. Back home his wife is longing for him. Wife goes to town,
meetsTanuja who invites her to her wedding with Jeetendra.

MrRagbag on Sunday, May 23, 2010
@deft8touch He is describing the beutiful weather and natural scenery as
his "mehbuba" and not is girlfriend as per common impression. When the song
comes for a second time in the film, at that time the song is in reference
to the girl

ninty9notout on Saturday, July 04, 2009
omg i heard this when i was a kid back in india and recently came across it
again while i was listening to "kal, aaj aur kal", a tribute to rafi saab
by sonu nigaam and i must confess, i haven't been able to stop listening to
it.

russel ahmed on Monday, August 03, 2009
UR right brother.it is the matchless voice of Rafi...the legend of
legends..a man beyond praizes who makes this song what it is.no doubt
its a great composition but Rafis voice tales it beyond mortals.