Video of this song from youtube
Average Rating : 4.31
Total Vote(s) : 61
Please rate this song between 1 star and 5 stars (5 stars being the best). Just move your mouse on the stars above and click as per your rating. Your rating will really help us to improve our website. 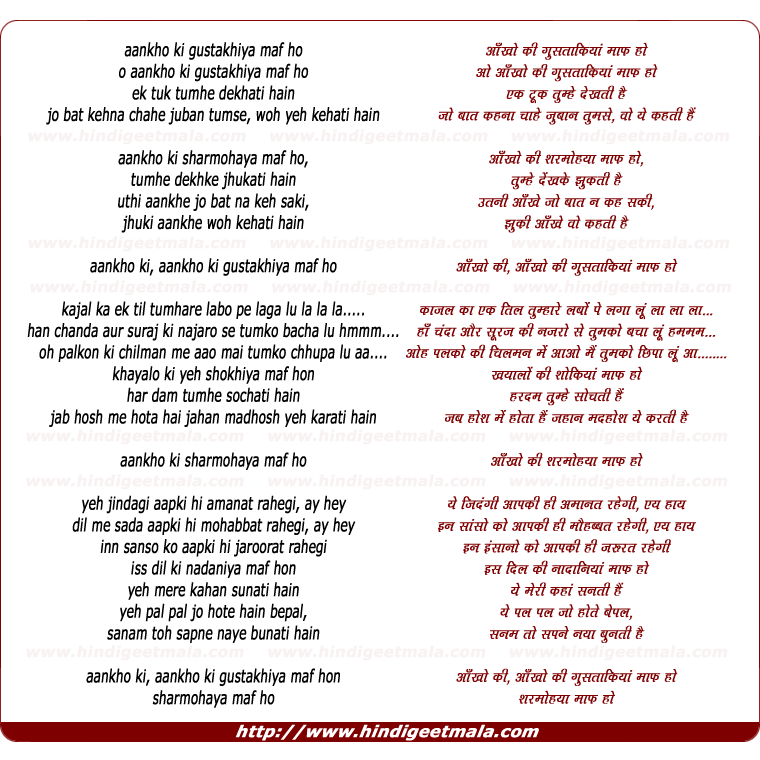 Comments on song "Aankho Kee Gustakhiya Maf Ho"
avalanche16 on Thursday, October 17, 2013
Listen I already said that I'm a fan of Aishwarya as well. She is an
important international face of beauty representing India. Liking Madhuri
or Aish comes down to opinion in the end. But one fact is that in Bollywood
and India, Madhuri is considered to be in a whole another league as an
actress. Many bollywood actors, actresses, and even Aishwarya Rai have
confirmed this. Another thing is that Madhuri has less plastic than Aish
which is also a common fact. Madhuri's age has caught up to her.

Noregrets281 on Wednesday, May 22, 2013
When I was 8, I wondered why Ash and Salman didn't do anymore films
together, because their chemistry was mindblowing. Then, I get to find out
that they had a real life relationship, which made me realise that their
chemistry was not all acting. Before I knew it, they have ended their
relationship. This made me broke my heart and I was hoping they would one
day be together..unfortunately the reality has shown that it is never going
to happen...seeing these songs still revive my hopes.

kuruptzZz on Tuesday, December 25, 2012
I remember seeing her on letterman, where she showed class and defended
Indian customs and culture (like living at home with your parents) and
didn't get offended when letterman mocked her for that...she didn't come
off as obnoxious/pretentious at all...anyone with an ego like what you're
saying wouldn't have been able to humbly smile through that..either way,
she is stunning, intelligent, a great actress, fantastic dancer, and former
miss world so I think she earned it anyway

peppers715 on Saturday, July 07, 2012
I don't know why you guys are accusing ASH saying that she used him..i mean
when and how she used him...she just starred with him only in this movie
and yes their relationship was the NATIONAL TOPIC for few years but when
the broke up ONLY ASH WAS SCREWED NOT SALMAN..HE JUST REMAINED SAME BUT ASH
LOST ALL MAJOR FILMS WHICH WERE ALL COMMERCIAL HITS AND BLOCKBUSTERS..AT
THAT TIME ASH OPTED FOR A BENGALI MOVIE AND ENGLISH MOVIES.

avalanche16 on Thursday, October 24, 2013
Are you mentally challenged or something? I said I'm a fan of Aish too so
why would I be jealous? Atleast you admit Madhuri is a better at acting
since they are actresses. As far as looks go it comes down to personal
opinion. Aishwarya has botox done on her entire face its very obvious while
Madhuri has aged gracefully.