Video of this song from youtube
Average Rating : 4.03
Total Vote(s) : 119
Please rate this song between 1 star and 5 stars (5 stars being the best). Just move your mouse on the stars above and click as per your rating. Your rating will really help us to improve our website. 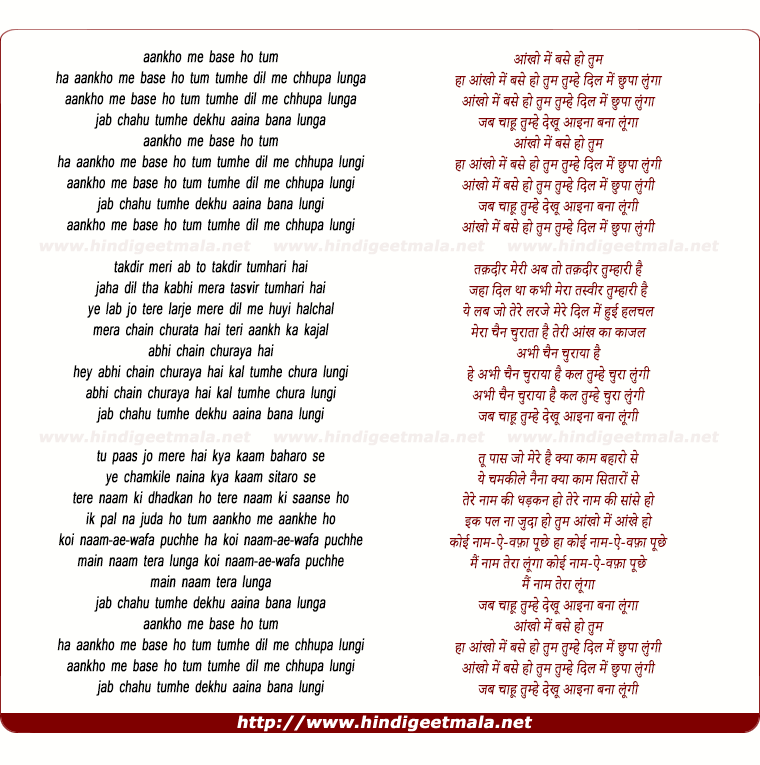 Comments on song "Aankho Me Base Ho Tum"
Somesh Nukal on Tuesday, May 29, 2012
sonali Bindre is one of the most beautiful actresses in Bollywood film
industry. Really good and gorgeous actress. Ok while coming to song aha i
am remembering my school days. At that time it came this song. Really great
song. Evergreen song. Sunil shetty has biggest hits and Musical hits at
that time. Very Good Music

rsg82 on Saturday, February 05, 2011
NOT TOO MANY ACTION HEROES LIKE SUNIL SHETTY ARE LEFT. HE WAS ONE OF THOSE
TRUE ACTORS U WANTED TO SEE FIGHT THE BAD GUYS. AND ALSO NOT TOO MANY MANY
TRUE SWEET BEAUTIES LIKE SONALI ARE LEFT. ALL PLASTIC NOW

Gaurav Soankar on Saturday, February 18, 2012
The cutest sweetest actress Bollywood ever had. I think her looks were
ahead of times had she entered today she had been the top actress... I
still get mesmerized by her looks

00kashyap00 on Friday, January 22, 2010
Sonali was so beautiful. Surprisingly, no bollywood actor paid much
attention to her. She unfortunately had to marry some weird guy.