Average Rating : 4.46
Total Vote(s) : 28
Please rate this song between 1 star and 5 stars (5 stars being the best). Just move your mouse on the stars above and click as per your rating. Your rating will really help us to improve our website. 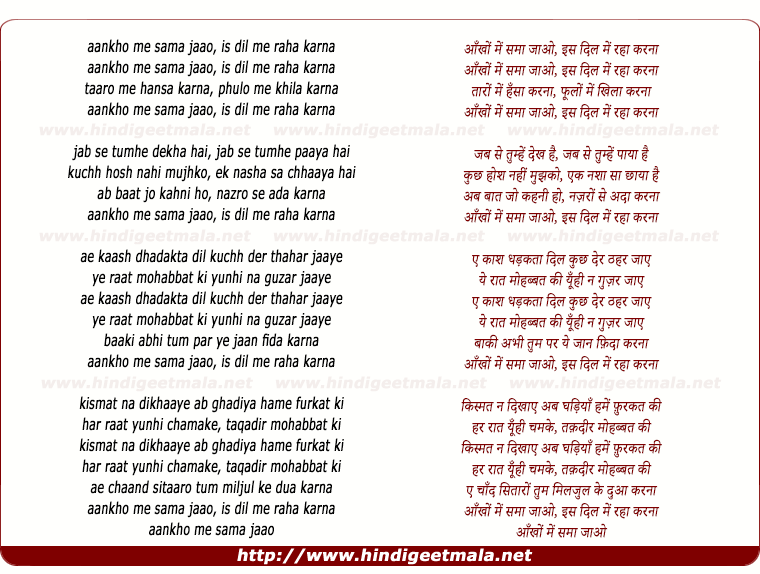 Comments on song "Aankhon Men Samaa Jaao, Is Dil Men Rahaa Karanaa"
RealMusicKing on Wednesday, June 02, 2010
CR was in love with the singing Nightingale. But she refused to marry him. Later, in 1966, she walked away from him for good. That, more or less, was the end of CR's career as a MD in Bombay. Sadly, he died in 1982. He was a very honest, friendly and loving human being. One can call him, the "Perfect Gentle Giant"
rumahale on Friday, December 30, 2011
Absolutely. I too don't find expression to describe the sheer beauty of this song. I was introduced to this song after enrolling membership in YouTube. In fact there was one video that was lost in great suspension spree. Gems like this one need revival and preserving. Thanks for the great initiative.
rumahale on Friday, December 30, 2011
Lyricist Jaan Nissar Akhtar, Composer C Ramachandra, Singer Lata Mangeshkar had this magical creation in movie Yasmin (1955), rendered on Vyjayantimala. Thanks again.
ravi7550 on Saturday, August 29, 2015
I keep listening to this master piece song after every few weeks .Lata ki
aawaz aur Chtalkar ke sangeet me ek anokha jadoo hai.
Ravi Sinha﻿

V. Siddhartha on Wednesday, February 17, 2010
Another platter of sumptuous CR-Lata delicacies. Your Yasmin uploads are of
the highest exquisiteness. Thanks, Ajay.