Video of this song from youtube
Average Rating : 4.53
Total Vote(s) : 77
Please rate this song between 1 star and 5 stars (5 stars being the best). Just move your mouse on the stars above and click as per your rating. Your rating will really help us to improve our website. 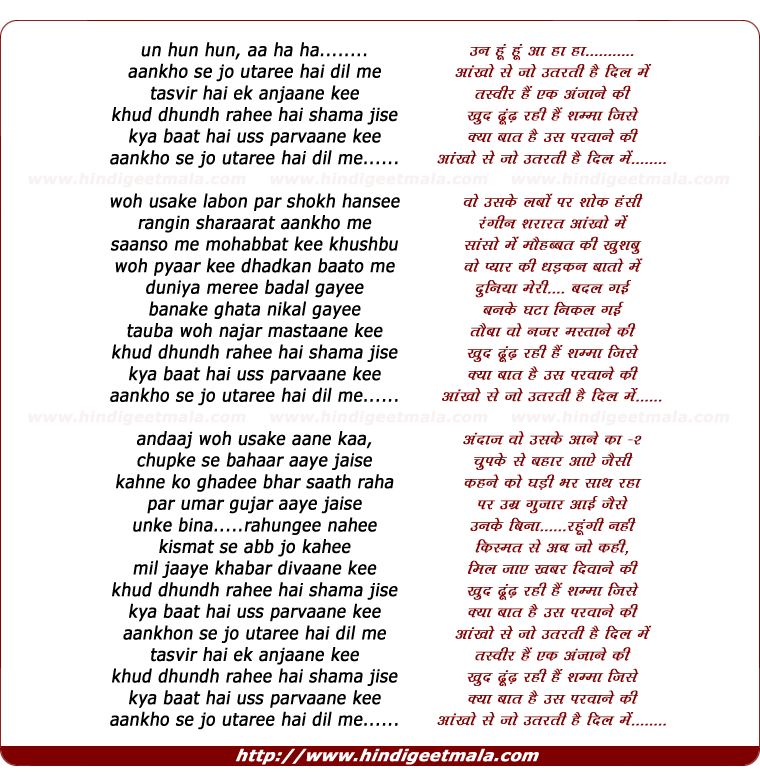 This song inspired the Telugu song "Ye Divilo virisina parijathamo"
from the movie Kanne Vayasu..beautifully rendered by a then young
S.P Balasubramanyam.. Timeless classics both ﻿

Surender Bhutani on Friday, August 23, 2013
Majrooh Sultanpuri told me in 1983 that he and O.P.Nayyar had composed this
song in less than 15 minutes. Nayyar just played his fingers on the
Harmonium and in no time the tune was ready. Hats off to both of them. Shiv
Kumar Sharma had played santoor pieces in the interlude. Dr Surender
Bhutani Warsaw (Poland)

1955shashi on Friday, July 02, 2010
A top hit from OP Nayyar + Asha. In fact all the songs from this film 'Mere Sanam' were super hits. This evergreen number is one of my fav and is most enjoyable at all times. Thanks Jemal for uploading this lovely video.
View all 49 comments related to song Aankhon Se Jo Utri Hai Dil Mein
Popular Links on HindiGeetMala