Video of this song from youtube
Average Rating : 4.46
Total Vote(s) : 142
Please rate this song between 1 star and 5 stars (5 stars being the best). Just move your mouse on the stars above and click as per your rating. Your rating will really help us to improve our website. 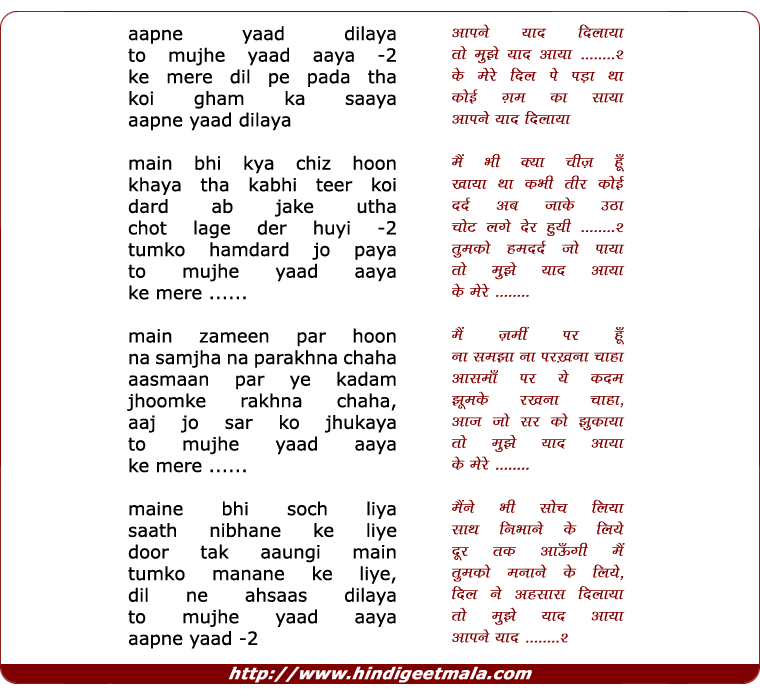 Comments on song "Aapne Yaad Dilaya To Mujhe Yaad"
devender68 on Friday, January 02, 2009
Pradeep Kumar was an established actor of Bollywood from early fifties to late sixties. He had acted in not hits but mega hits like Nagin, Anarkali,Taj Mahal, Goonghat,Raakhi, Chitralekha, Bahu Begum, etc. These movies are as famous as they were earlier. I think it is highly unustified to compare Pradeep Kumar with likes of Karan Dewan,Mahipal, Joy Mukherji, Bishwajit, Anil Dhawan, Vijay Aora. Again I would say Bharat Bhushan was also an established star and the same is true for him also.
devrawat68 on Friday, March 20, 2009
And as far as one say that mega hits movies rich in content, expressions and every aspects of film making like Anarkali, Taj Mahal, Nagin, Chitralekha, Goonghat, Mirza Ghalib, Phagun, Baiju Bhawara, Barsaat Ki Ek Raat starring legendary actors like Pradeeep Kumar and Bharat Bhushan were popular among rustic and semi-urban people is hardly believable. Please do not let down the contribution of eminent artists of erstwhile Bollywood.
shama475 on Tuesday, June 09, 2009
she'd to work to support huge family as a child of 5 i think.sadly and just imagine how what she went through during those horrific days among the vultures noch noch ke khaa gaye hoge bechari ko...isliye itna dukh hota tha unki acting mein surat mein ankhon mein aur poetry mein ..itna dard just imagine a child of 5/6 in big bad world of films maa baap ne chhor diya filmon mein jaao paise kama ke lao.uffo
devender68 on Wednesday, December 31, 2008
Melodious composition by Roshanji. Lata and Mohammad Rafi had stood to their stature. I have read comments passed on the acting of Pradeep Kumar. I stressed here that Pradeep Kumar had done justice to this song by his acting which is full of emotions. What a great actor he was. Meena Kumari is as great as ever. Such eminent artists can make this number so famous and successful.
motandas1 on Friday, March 06, 2009
Both Bharat Bhushan and Pradeep Kumar were brazen. Besides the facial expressions, they lacked subtle nuances of performances. But both were good crowd pullers which could most often than not was because of music , lyrics and fine renderings. Pradeep Kumar was certaily lucky in that the audience mostly rustic/semi urban just flocked his movies.
View all 26 comments related to song Aapne Yaad Dilaya To Mujhe Yaad
Popular Links on HindiGeetMala