We will add as soon as the video of the song is available.
Average Rating : 4.25
Total Vote(s) : 8
Please rate this song between 1 star and 5 stars (5 stars being the best). Just move your mouse on the stars above and click as per your rating. Your rating will really help us to improve our website. 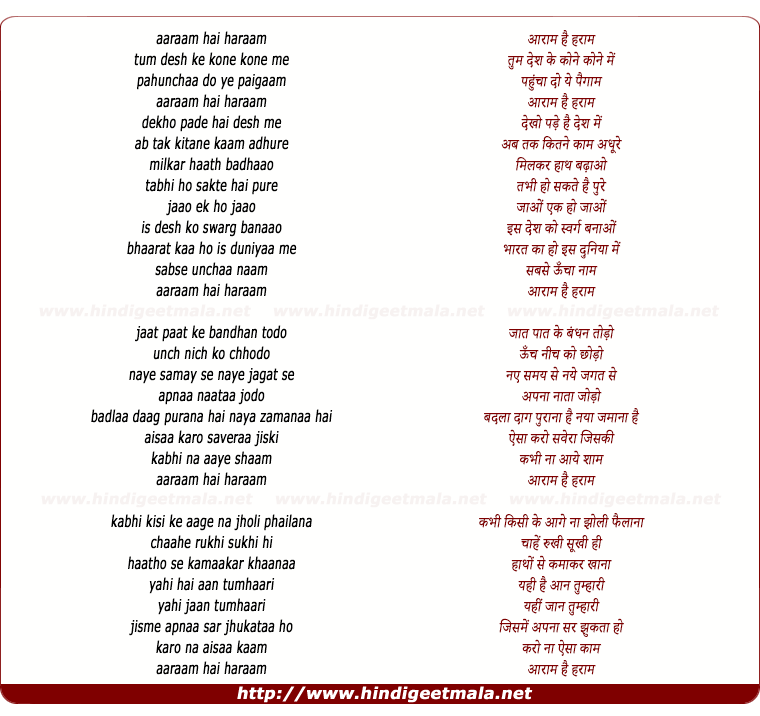 Comments on song "Aaram Hai Haram"
ShivKumar44 on Tuesday, October 11, 2011
Thank you amitajaijee I enjoyed the clip of Apna Ghar1960. However, I am
kind of confused on watching in the middle of Aaram Hai Haram song that the
presence of the then Prime Minister of Bangladesh taking salute in Delhi
with Mrs Indira Gandhi then Prime Minister of India and the time was 10
January 1972 while Sheikh Mujibar Rahman was on his way to Bangladesh made
a stop over in Delhi. Apna Ghar was released in 1960, Sheikh Mujib PM of
Bangladesh 1972.Can anyone do the math please?

Ravi Gokhale on Tuesday, August 11, 2009
Superb creation by Ravi-Rafi-Asha. Fabulous. Hope you get many Rafians to
appreciate this beuty. Many thanks.

nilaupuli on Tuesday, February 21, 2012
can anyone upload the movie? i'm so waiting to see this b/c of nanda and
moti sagar together.