Video of this song from youtube
Average Rating : 4.35
Total Vote(s) : 116
Please rate this song between 1 star and 5 stars (5 stars being the best). Just move your mouse on the stars above and click as per your rating. Your rating will really help us to improve our website. 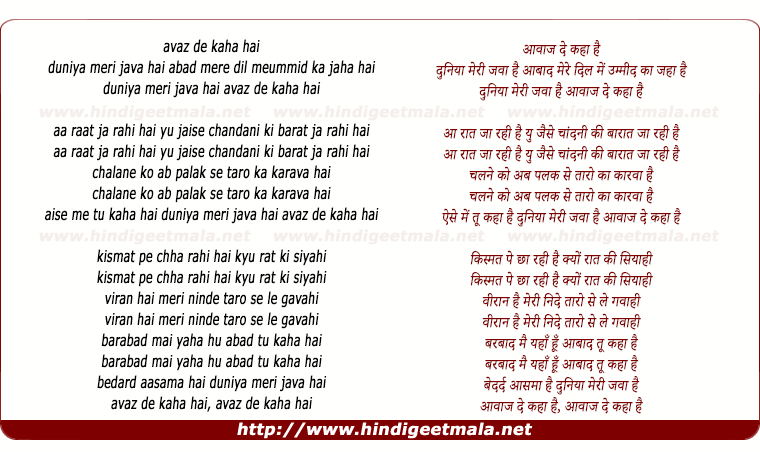 Comments on song "Aavaaz De Kahaan Hai Duniyaa Meri Javaan Hai"
RealMusicKing on Monday, August 23, 2010
Hello. What a voice! I mean Surender Nath's. In 30's and 40's, Surender was the second actor with a superb voice after K.L. Saigal. Unfortunately, come 50's and into 60's, Surender faded away as a singer and remained just as a role actor, mainly father. He did act as hero in film Gawaiyya 1954, music by Ram Gunguly where he was playbacked by Talat Mahmood.
Hiren Patel on Saturday, December 29, 2012
Thanks for viewing this one on my channel.I do not think she has killed the
song.She normally sings for Lataji and Ashaji but sometimes she has to sing
in different voices as there can not be as many singers in a live show.She
likes Shamshadji and Surayaji's songs and sings for her pleasure and tries
to be as close as possible.One should laud her attempt rather than
criticizing.Thanks for rating her as an excellent singer.Like Anand has
sung in Surendra's voice but sings only Kishoreda's songs!

Hiren Patel on Monday, March 18, 2013
You are most welcome, Vibhavari does sing those singers too if needed and I
too agree that they were great singers but at the same time you can not
forget Lata specially till sixties she was excellent and has given us some
mind blowing melodies to cherish. Amirbai and Rajkumari had a typical
voices quite difficult to imitate and there are very few takers for that.
Yes Surendra and Noorjahan have excelled in this one.Pleased that you liked
Vibhavri's Indian culture in which she strongly believes.

Hiren Patel on Monday, March 18, 2013
I am elated to have your opinion that Vibhavari is glorious in our Indian
wears and culture and she too believes in them. This is the reason she did
not go to Bombay knowing how the industry is! I am more pleased because she
is my daughter and I did not tell you as I wanted your frank opinion!! Your
blessings are appreciated a lot. Yes Anand is a talented singer and sings
Kishoreda but occasionally sings some other singers too. Hes is lean yes,
but very energetic too.

Hiren Patel on Wednesday, August 03, 2011
@Alishahind There can be no better complement than what you gave to both
the singers Mr.Ali.I am delighted to have them.Both singers with their
group have come to USA to perform their GUZRA HUA ZAMANA theme shows all
over.This definitely will boost up their morale and confidence.My hearty
thanks Mr.Ali for your such accolade for them.Yes they have immortalised
Mallik a tarannum.I have already passed on your complements to both of
them. Regards, Hiren.