Average Rating : 4.18
Total Vote(s) : 11
Please rate this song between 1 star and 5 stars (5 stars being the best). Just move your mouse on the stars above and click as per your rating. Your rating will really help us to improve our website. 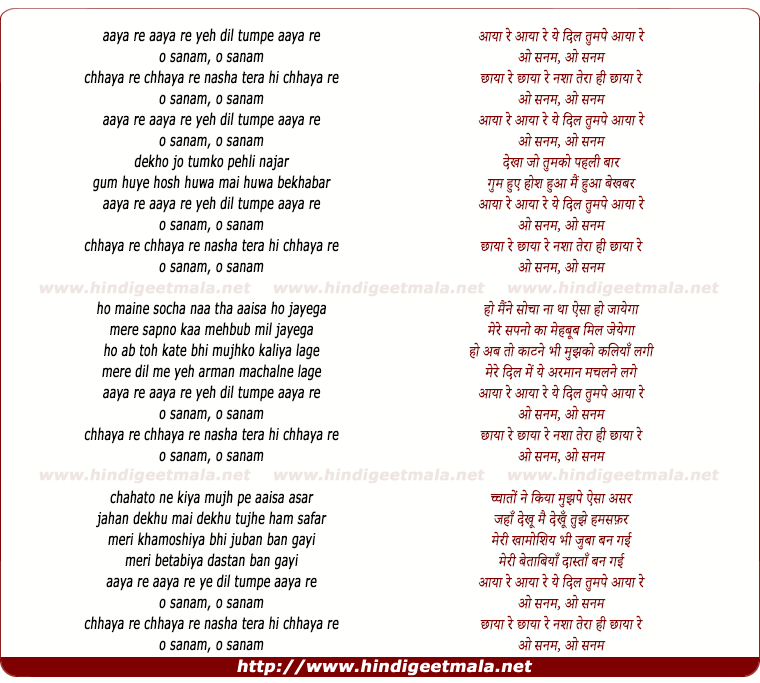 Comments on song "Aaya Re Aaya Re Ye Dil Tumpe Aaya Re"
Michelle Grey on Thursday, April 21, 2011
@kaminoneh You don't know Kareena at all, so that doesn't allow you to
judge her. On the other hand, Saif and his ex wife Amrita broke up way too
long ago even before he started pursuing his relationship with Kareena. So
that's not a legit. statement. Besides, Kareena's open about her
relationships with others. If Shahid hasn't told the media whether or not
he's in a relationship, it doesn't mean he's not in one. There's tons of
actor/actresses who don't share their personal life.

brklynmay1 on Friday, February 20, 2009
i think that kareena and shahid should go back together because they have
great chemistry and they r not over eachother trust me im their biggest but
not hugest fan of the 2 people i think would make a perfect couple.

mbrocs13 on Wednesday, January 14, 2009
totally right, either her or priyanka, i heard they were hanging out and i
luv priyanka, so wat ever makes him happy. but u're definitely right!
amrita and him r the best couple

piecendfunable on Monday, September 03, 2012
bt beeing honest Shahid was gt much more attraction adn better boidy than
kereena! i hate her! he is sooo well built and good looking and cute!! shes
too fat 4 him!!!

sweetnatasha8888 on Friday, September 17, 2010
I love shahid he's sooo cute and I keep on looking at the bit where he finds out she sed I love u and the bit before the song that's just sooo sweet x
View all 66 comments related to song Aaya Re Aaya Re Ye Dil Tumpe Aaya Re
Popular Links on HindiGeetMala