Video of this song from youtube
Average Rating : 4.45
Total Vote(s) : 1354
Please rate this song between 1 star and 5 stars (5 stars being the best). Just move your mouse on the stars above and click as per your rating. Your rating will really help us to improve our website. 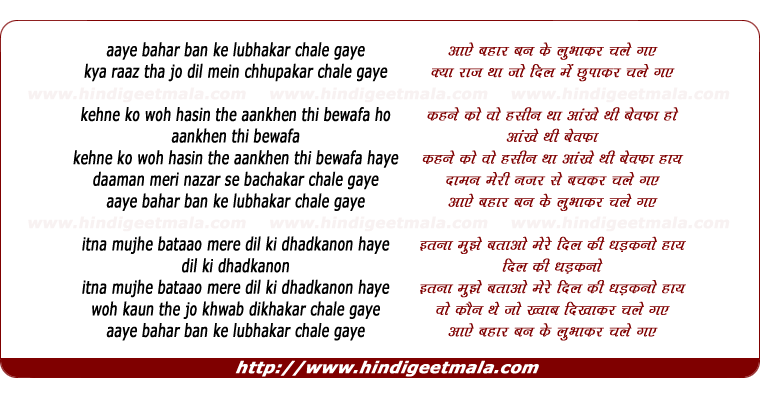 Comments on song "Aaye Bahaar Ban Ke Lubha Kar Chale Gaye"
rumahale on Wednesday, January 25, 2012
@Sholay48 Very very touching comments and right thinking - some of the
present day generation people may not agree. I fully endorse your view. For
me, Rafi Sahab lives in my heart. I had the rare honour of seeing him and
listening his live programme in Bangalore, India in May 1979 - about one
year before his leaving us physically.

sureshshah3 on Saturday, January 14, 2012
Best Composition In Ragesgree+Bageshree Raga by SJ Only Rafi Saab could
sing it in a different mood & fine expressions as the Lyrics are of
seperation but situation in the Movie is romantic.Song without Visuals
,seems like a sad song but it is'nt. Aalap in the beggining is heart
catching and so expressive that U feel,really A lover is calling his
beloved (Old Style) One of the best & difficult song of Rafi Saab to
perform live with Aalap.Thanks 4 Upload my most favourite song of Rafi
Saab.

Sholay48 on Wednesday, January 25, 2012
@rumahale Thank you my friend. Its always nice to hear experiences of
people when it comes to Rafi saheb. I feel lucky too to have seen him in
live show on 4 occasions. Twice in the late 60's and twice in October 1979
on his trip to London, the last one being in Mile End. His shows were
always magic and all sold out with people outside the theatre with no
tickets enough to have filled the theatre again. And just to add, I sneaked
in among the crowd to shake his hands. he did not refuse

Sholay48 on Wednesday, January 25, 2012
@rumahale On that day, he was wearing a blue suit and todate, I can still
smell the perfume he was wearing. It was an experience never to forget.
When I hear the comments made by Jacki Schroff that he would have settled
to get a job just to polish Rafi's shoes, I fully understand what he means.
He was really a great man. Younger generation would see him only
objectively. They have to read about him to know him. We are lucky to have
been living in his time. We are sujectively involved.