Video of this song from youtube
Average Rating : 4.14
Total Vote(s) : 856
Please rate this song between 1 star and 5 stars (5 stars being the best). Just move your mouse on the stars above and click as per your rating. Your rating will really help us to improve our website. 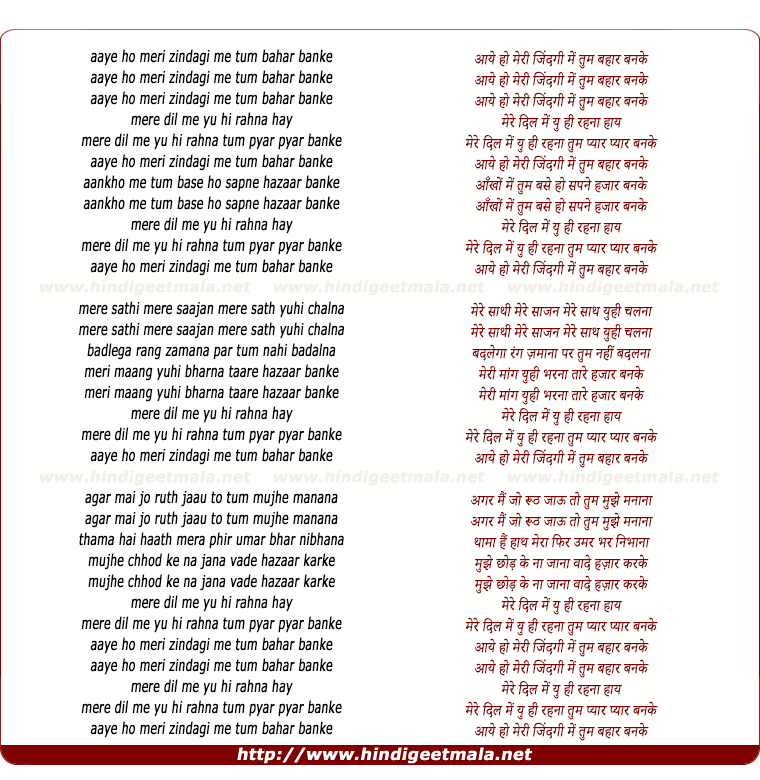 Comments on song "Aaye Ho Meri Zindagi Me Tum Bahar Banke (Female Version)"
Oyun Bülteni on Saturday, June 08, 2013
you are right. cant stop laughin at it. kareena slapped a senior news
reporter in a meeting. she is trying to be smart. i could find the clip
here >-> bit.ly/15WyAgR?=fvqvu

liverpoolisbest1001 on Monday, February 11, 2013
Girl's version is a sad one while guy's version is more happy and romantic
one. I love both versions but when I listen to this version, I always begin
to cry.

1231lovelyn on Wednesday, December 07, 2011
looks like you haven't watched the movie but her dad is against the marriage and has abandoned her.. duhhh

Poor Meno on Sunday, January 27, 2013
"Mujhe chorr ker na jana, waadein hazar kar kay." One of my most favourite
love songs from the 90's. Though I like the voice more of the guy's
version... the girl's version is sweet just because it's a girl singing. A
girl's wish before she's married asking the guy to love her always as he
loves her in the moment. How beautiful!