Video of this song from youtube
Average Rating : 4.39
Total Vote(s) : 113
Please rate this song between 1 star and 5 stars (5 stars being the best). Just move your mouse on the stars above and click as per your rating. Your rating will really help us to improve our website. 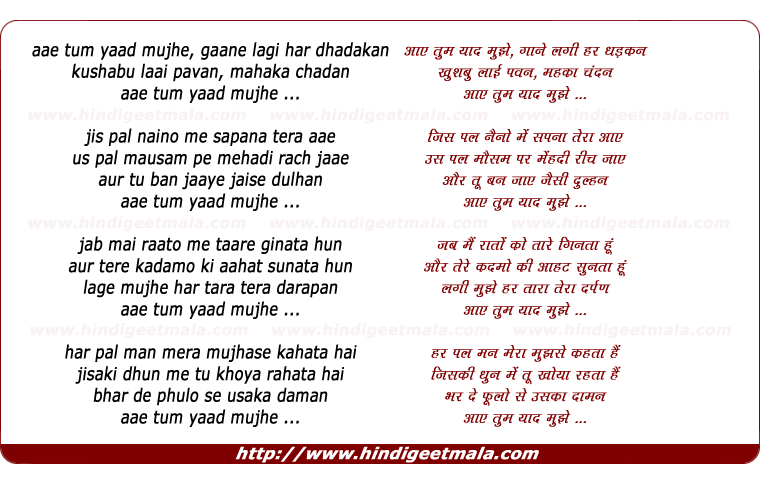 Prince Charm on Tuesday, January 13, 2015
Everyone is praising Kishore Kumar, SD Burman, Hrishikesh for this song, no
doubt, the melodious and mesmerizing voice of Kishore, the evergreen and
soulful music of SD Burman, but as much these two people make this timeless
equal credit should go to the lyricist who was Yogesh Gaud. Seems like the
person who posted doesn't know the lyricist.
Yogesh Gaud was among few lyricist who were highly underrated but he wrote
some really memorable songs which if someone doent know who wrote think
about any great lyricist like Anand Bakshi, Shair and likes.
Please put Yogesh Gaud name in lyricist so that people should know that the
wording which made this song ever lasting was penned by Yogesh.﻿

dhuru123 on Friday, October 08, 2010
Just Amazing. Deep pain in the voice which touches your inner chord...
Whats more special is the way in which it is piturized in the movie.
This songs comes as background when he misses Jaya and one more movie in
this song Badi Suni Suni hai in which Amitabh misses her Mother.The settle
emotions Amitabh brings in this movie are excellent. Truely a master
piece by Hrishida... Hrishida... which you lived for ever. You will be with
us for ever with your movies... Movies which spelt life..

MyKaempfer on Friday, January 06, 2012
@ arideep--- Hi, I am a researcher of old Hindi film music, so I am aware
of all the facts in this regard. If you consider that, then after 1965, the
maximum songs of SDB films were RDB compositions. But we should follow the
official information provided to us; what the record label says.

aatayyab on Sunday, August 23, 2009
I remembered you Every heartbeat started to sing Rain brought beautiful
smell The whole moonlight felt good The moment your dream comes to my eyes
Seasons get colored at that moment with Henna And you'd become like a bride