Video of this song from youtube
Average Rating : 4.51
Total Vote(s) : 463
Please rate this song between 1 star and 5 stars (5 stars being the best). Just move your mouse on the stars above and click as per your rating. Your rating will really help us to improve our website. 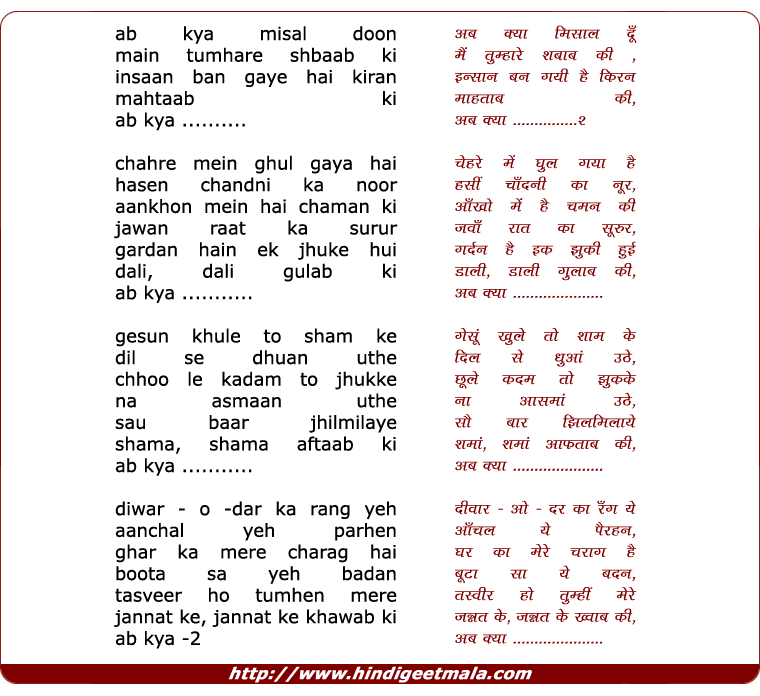 Comments on song "Ab Kya Misal Doon Main Tumhare Shbaab Ki"
man from philly on Monday, March 23, 2009
In "Ek Bhut Banaunga" - Dev Anand's goofy antics prior to the singing
offset the scene that is supposed to be romantic. His acting does not match
the romance of the scene at all. Fortunately, Mohammed Rafi's singing
overcomes that shortcoming and makes him romantic. In "Koi Sone Dilwale" -
prior to the singing, Dev Anand has some lines he renders in a dry, old,
stale, quivering voice. That's how I genuinely feel about the delivery (not
just to criticize). Rafi compensates with excellent singing.

man from philly on Monday, March 23, 2009
Again, it is the romantic persona that Rafi puts into Koi Sone Dilwale that
pretty much rescues the wooden actor and gives him the romantic image. In
fairness, Dev Anand matched well with Kishore in the 50s. By the 60s, Dev
Anand's deliverly became stale and both Rafi & Kishore were far too
energetic and youthful and projected that onto Dev. What would Guide be
without Rafi & Kishore? Pradeep Kumar was a better actor than Dev Anand and
more talented. He just didn't have the excess heroic looks.

Zil Hasnain Kazmi on Thursday, February 03, 2011
Centuries will pass before another voice of such calibre, elocution and
style will be gifted to this planet again. No body could ever reach to his
height.He had complete control in all sorts of variations in singing. A
naive persona, he could naturally justify the poetic lyrics and I think the
poets created these inspired by his voice as they could imagine their
creations just as the composers did, Rafi Sahib are immortal and his
rendered services will remain in our hearts.(4rth February 2011)

man from philly on Monday, March 23, 2009
now, on the subject of dev anand. he was a wooden actor with two redeeming
traits: the look of a "good indian boy" and excellent choice in SD Burman.
as an actor, he relied heavily on both Mohammed Rafi & Kishore Kumar.
Normally, Rafi or Kishore would try to match the actors. It was the other
way around for Dev Anand. Dev Anand's best shot at being "romantic" was to
emulate Rafi Sahab's romantic persona. His best shot at being lively and
fluid rather than dry was to emulate Kishore Kumar.

sonny19xx on Sunday, February 14, 2010
Actually it is the other way around. When it is Lata you can clearly say
that MDs play a greater role. Becos her voice gets to be shrill sometimes.
But if it is Rafi the voice and diction is absolutely faultless. I
personally dont rate Lats's voice very highly. Though in this song Rafi's
voice comes first and then MD Roshan next. MD Roshan cannot be forgotten.
Roshan and Rafi used to share a strong relationship. But not to forget
Meena Kumari. Actually I like her the most.