Average Rating : 4.21
Total Vote(s) : 56
Please rate this song between 1 star and 5 stars (5 stars being the best). Just move your mouse on the stars above and click as per your rating. Your rating will really help us to improve our website. 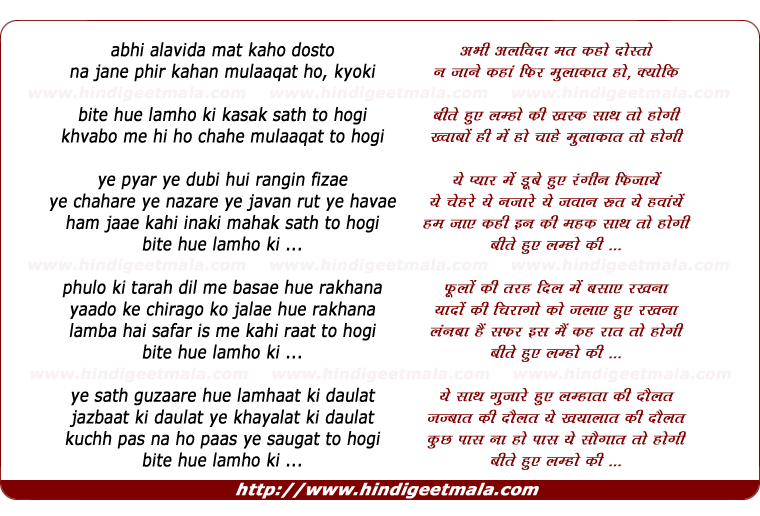 Don't bid goodbye --not yet friends
you never know when we shall meet again, because

this colourful atmosphere submerged in love---
these faces, these sights, this young weather, this breeze...
where ever we go ...their aroma will always remain with us--

The wealth-of moments that we spent together- of immotions/feelings--of
thoughts---
even if we have nothing else left with us - at least this donated gift by
friends will always be with us .

Ahmed Hemani on Wednesday, March 24, 2010
Ravi saheb's super composition and Hasan Kamal's lyrics and inimitable
voice of MK. A very similar song, similar emotions, similar situation was
in the film Mere Mehboob. A gap of almost two decades between two films and
yet so similar !.

rmeshc on Monday, September 03, 2012
plastic face of salma agha and raj babbars lousy look!!saw this movie in
priya cinema,calcutta in 1983 and liked it!today when i see the song think
how i could like such a lousy film!!