Average Rating : 4.14
Total Vote(s) : 7
Please rate this song between 1 star and 5 stars (5 stars being the best). Just move your mouse on the stars above and click as per your rating. Your rating will really help us to improve our website. 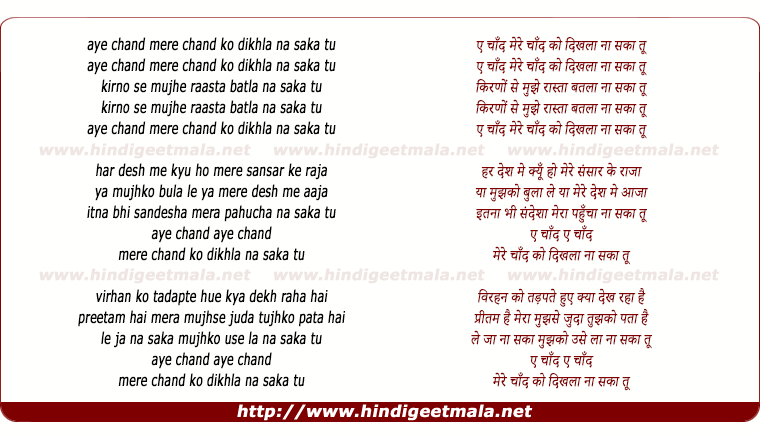 Comments on song "Ae Chand Mere Chand Ko Dikhla Na Saka Tu"
rumahale on Sunday, November 06, 2011
We have common choice in appreciating good quality songs, and, firmly
believe that BRANDS alone do not matter always. This song has justified it
- the names in the introduction are not familiar except that of the singer.
Soulful and beautiful rendition by Geeta Dutt. I liked it immensely. Tried
badly for the lyrics but in vain. The apt visuals are added attraction.
Thanks for this rare gem.

nandu1f on Saturday, September 08, 2012
Geeta Dutt was gem of a singer with immense skill and a haunting voice
quality. Had not heard this charming song before. Yes, CrazyOldSong's
lyrics helped me to catch the beauty of the poetry. If Suhanee can place
English translation on this video as she so ably did for "har aans ashkbar
hein.." (Kinare2), I can even forward it my kids so that they can
appreciate the charm of our movie music. Thanks.

rumahale on Wednesday, November 09, 2011
@crazyoldsongs We have always held that Lyrics play equally important role
in success of a song. Your action in displaying the full lyrics has
justified it. I believe these were finalised on listening the song. Thanks
for the initiative.