Video of this song from youtube
Average Rating : 4.39
Total Vote(s) : 1071
Please rate this song between 1 star and 5 stars (5 stars being the best). Just move your mouse on the stars above and click as per your rating. Your rating will really help us to improve our website. 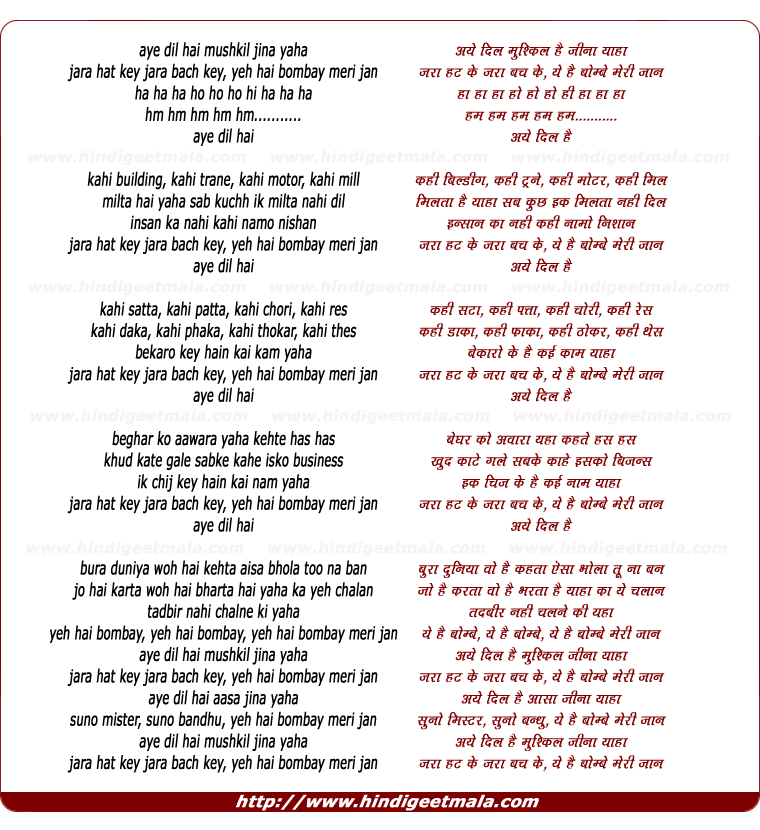 Comments on song "Ae Dil Hai Mushkil Jina Yaha, Zara Hatke"
heydude4444 on Friday, February 06, 2009
i meant no offense by 'calm down'...that was just tongue-in-cheek, so no hard feelings :) most art/music/lit/etc can probably be traced back to some previous work of art/music/lit that inspired it, but i agree in general that bollywood certainly needs more originality...besides, the times that it has been fairly original have been received well -- think of flix like lagaan, munna bhai, etc. PS this explanation itself was partly inspired by the south park ep 'simpsons already did it'! ;)
dreadadiplomat on Wednesday, February 04, 2009
1st, I didn't realize I was not calm and 2nd It's all inspired isn't it? So
easy to be inspired to change the language and keep the rhythm. What an
easy excuse. I recognize good bollywood music/movies, but when movies
ranging from 'Overboard' to 'Rat Race" and music ranging from 'Cotton Eyed
Joe' to Korean or Turkish marching songs are merely inspired, then it's a
lil too much. I mean even the name Bollywood is inspired from Hollywood

sonny19xx on Sunday, March 14, 2010
great song . the mukhda is a straight lift from " my darling clementine"
the rest is ofcourse OP's . That means the rhythm of the song is also a
straight lift. The heart of the song is yet the mukhda. Iam a diehard fan
of OPN. But facts are facts and ought to be admitted. THANKS junkers1980

Gopal Marathe on Friday, July 31, 2009
Yes I am. I also teach music. I have worked with many world class musicians
such as Girija Devi, Sitara Devi, Zakir Hussain and others.