Video of this song from youtube
Average Rating : 4.55
Total Vote(s) : 74
Please rate this song between 1 star and 5 stars (5 stars being the best). Just move your mouse on the stars above and click as per your rating. Your rating will really help us to improve our website. 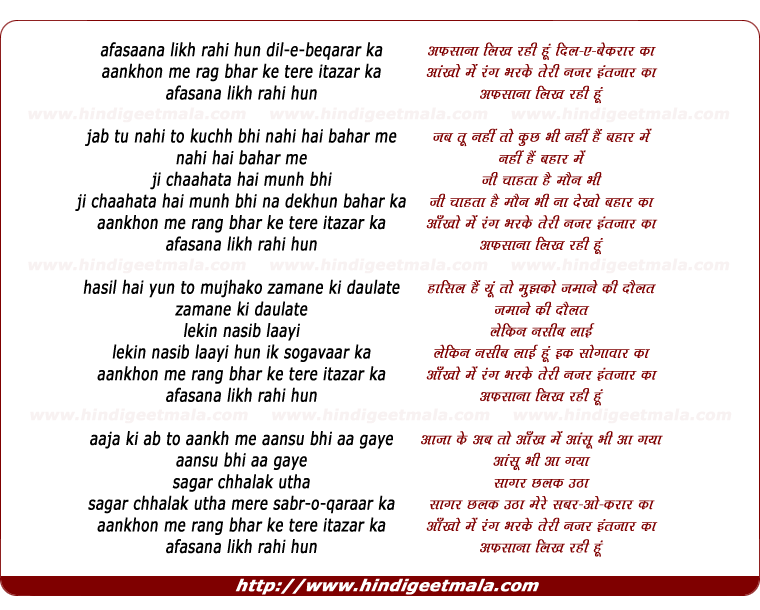 Comments on song "Afasaana Likh Rahi Hun"
Colonel Rao on Monday, September 12, 2011
With this song Umadevi shot into fame and she gave many hits that are
fondly remembered even today. However with change of times, she did not get
further oppertunities to sing and confined herself to comic roles and yet
as an actress she made a place for herself. Though her songs are few each
and every song was a hit.Thanks for uploading the famous song.

Satish Shetty on Monday, December 24, 2012
This song sung by Uma Devi very famous.However she could not compete with
Lata Mangeshkar and sisters,great singers of tha time.So she had changed
her profession from singer to comedy actor in the name of Tun Tun,where she
made a big name as leading comedy actress.Really talented as singer and
actress.

SPChitale on Monday, March 07, 2011
Umadevi alias Tuntun was a very good singer with equally good voice quality. In fact she had also sung with the immortal Saigal. I have rwad somewher e that later on somehow she put on looot of weight and preferred to comedian roles where also she created her own place.
Zil Hasnain Kazmi on Tuesday, January 11, 2011
What a luck of Tun Tun(uma Devi). She was introduced by Late Naushad Sahib
in film Dard. Her probably the first song went sky rocket high.
Unbelieveable. Hit song you would listen this song on every corner. I like
it and I always enjoy it.(11th Jan 2011)

Good luck cool on Sunday, May 05, 2013
Thanks for replying and I felt very sorry to hear that she was no longer
with us. May God give her peace and I am saying my duaa for her. I always
listen to her songs which she had left behind for us to enjoy good wishes
to you.