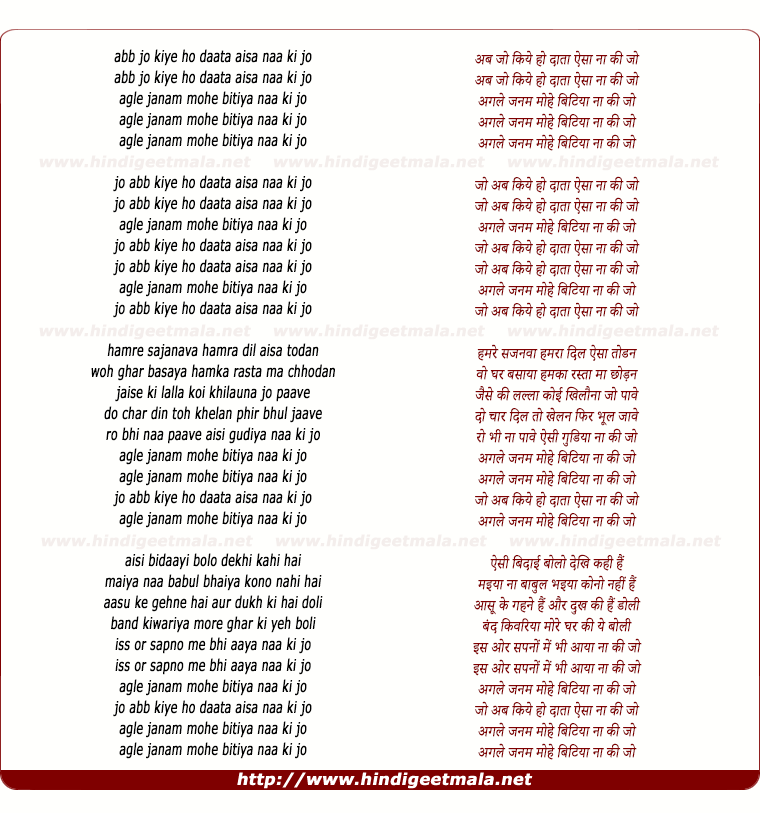 Comments on song "Agle Janam Mohe Bitiya"
Khaaperai on Saturday, July 04, 2009
You're right, erinsal. And its not just the natural pains that women go
through that are expressed in this song; its a lot of other things as well,
mostly the negative, unjust treatments that women "earn" for being women
(something they didnt choose themselves) in many, many parts of the world.
Some women are divorced or completely abandoned by husbands and in-laws for
giving birth to daughters and the daughter is a servant of parents before
marriage and servant of husband & in-laws after!

Ahmed Bilal on Monday, June 08, 2009
you misunderstand and misinterpret the true meanings of this song, where
this song tell the pain of a girl who due to her fate go into wrong hands,
unwillingly it is her sigh that if being girl i have to pay such a high
penalty of a life i don't want, then in next birth Oh God! don't make me a
daughter of any person if every daughter has to pay such penalty. Because
she is expressing only her own painful experience and everybody feels
better for oneself then any other spectator. u get me?

WoodDesigner1 on Thursday, January 13, 2011
@shaukatjamil
"Agle Janam" is a beautiful but sad song. We see Amiran at a childhood friend's wedding where the song was first sung where her father was tearfully watching her. While Amiran was growing into womenhood she was tearful one day thinking of this song "Agle Janam" as she was feeding the birds. When asked why she was unhappy she recounts of a childhood song to her poetry instructor, whom she called "Abbu". Empathy! And Charity in Thoughts, Words & Deeds is much needed in society.

idkkkk on Saturday, March 07, 2009
@imali2K: i m not trying to critise i agree what you said but what u said
is used as one of the example ,,there is other example used when she says
something that her loved once broked her heart same as way a child gets a
TOY plays with it for few days then forget about it AND THEN SHE COMPARES
HERE THAT A GIRL IS LIEK WHICH CANT EVEN CRY AND I DONT WANT TO BE A LIKE
THIS IN MY NEXT LIFE so basicaly all over its about the sad part of being a
girl phew sry if someone felt critisised

Ibrahim Ali on Wednesday, January 14, 2009
its sung at weddings when the bride leaves her house, and its basically
women who are already married who sing this song on her behalf. it means
'in my next life please don't make me a daughter'. because the sadness of
leaving home (which only a daughter traditionally does) is so overwhelming,
that they wouldnt want to experience it again. i hope thats right, feel
free to change it if anyone knows better.