Video of this song from youtube
Average Rating : 4.71
Total Vote(s) : 24
Please rate this song between 1 star and 5 stars (5 stars being the best). Just move your mouse on the stars above and click as per your rating. Your rating will really help us to improve our website. 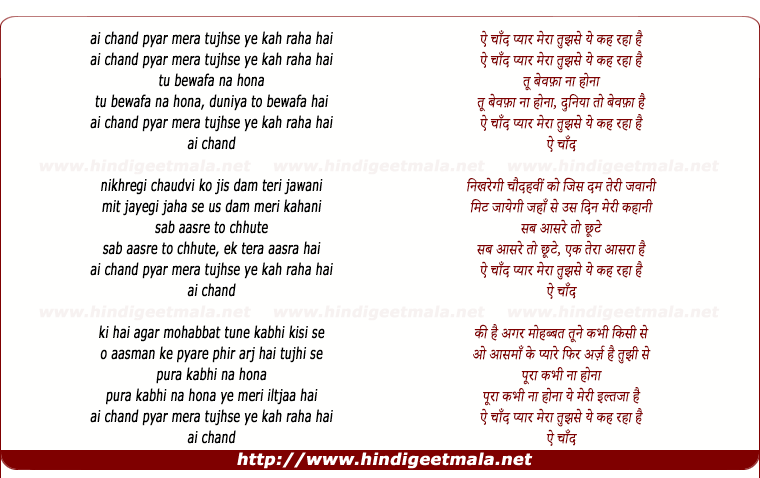 Comments on song "Ai Chand Pyar Meraa Tujhase Yeh Keh Raha Hai"
nandu1f on Sunday, August 05, 2012
Lata's magic weaves effortlessly between the high and low notes maintaining
the sweet haunting quality of her voice to capture our heart and soul. An
immortal composition by C. Ramchandra. Thanks Ajay ji for your contribution
in keeping these absolutely enchanting old numbers alive and Shekhar Gupta
to pass it on to me to swoon over. Wish there was a video available.

V. Siddhartha on Wednesday, October 28, 2009
There once again is a cup of divine nectar from Lataji.Lataji's young voice
was sanctified by Heaven itself, but so were the compositions of CR and of
all the other great MDs prior to the 1970s;they gave her absolutely
heart-stirring melodies. One finds that combination only rarely in her
later repertoire. Thanks for another splendid treat, Ajay.

tkyaheya on Sunday, January 17, 2010
A big thank you for the superb service rendered by you.ï»¿ I need some valuable information from you.
I need the Names of the films and the Hindi song titles of the following 02 songs sung in Sinhala by our own Rukmani Devi. Both these haunting songs were sung by Lataji.
1. Ma Obe Suda
2. Chandra Kimadoo
A big thank you.