Video of this song from youtube
Average Rating : 4.71
Total Vote(s) : 45
Please rate this song between 1 star and 5 stars (5 stars being the best). Just move your mouse on the stars above and click as per your rating. Your rating will really help us to improve our website. 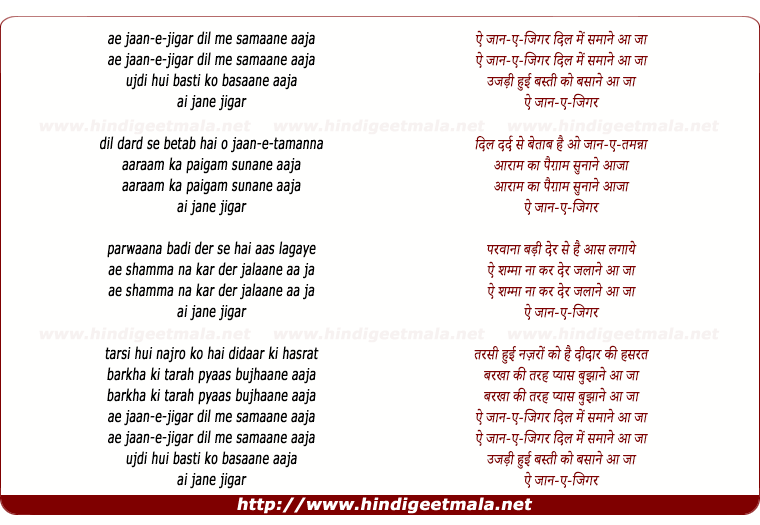 Comments on song "Ai Jane Jigar Dil Me Samane Aaja"
RealMusicKing on Monday, April 02, 2012
Hello Sirji. Hope you are doing well. Talat started his singing and acting career in Calcutta. Once he came to Bombay, his very first film role was a guest appearance in Aaram singing "Shukriya Aye Pyar Tera Shukriya". Regards.
V. Siddhartha on Monday, January 05, 2009
The early voice of Mukesh was a matchlessly sweet gift from heaven to
listeners --a sublime form of honey tinged with some deep-seated dard in
his heart smoothly flowing from his lips. Many thanks for posting this
enthralling song.

rumahale on Thursday, January 15, 2009
Beautiful song. Besides Dev Anand, Madhubala and others significantly Talat
Mahmood also is in the cast. Music from Anil Biswas is soothing.

Suresh Lotlikar on Friday, September 13, 2013
Great music,great lyric and velvety voice of all time great Talat. Thanks
for the upload.

rahdisas on Thursday, June 18, 2009
One of my favourite songs - Mukesh's voice at it's sublime best.
View all 9 comments related to song Ai Jane Jigar Dil Me Samane Aaja