Video of this song from youtube
Average Rating : 4.58
Total Vote(s) : 12
Please rate this song between 1 star and 5 stars (5 stars being the best). Just move your mouse on the stars above and click as per your rating. Your rating will really help us to improve our website. 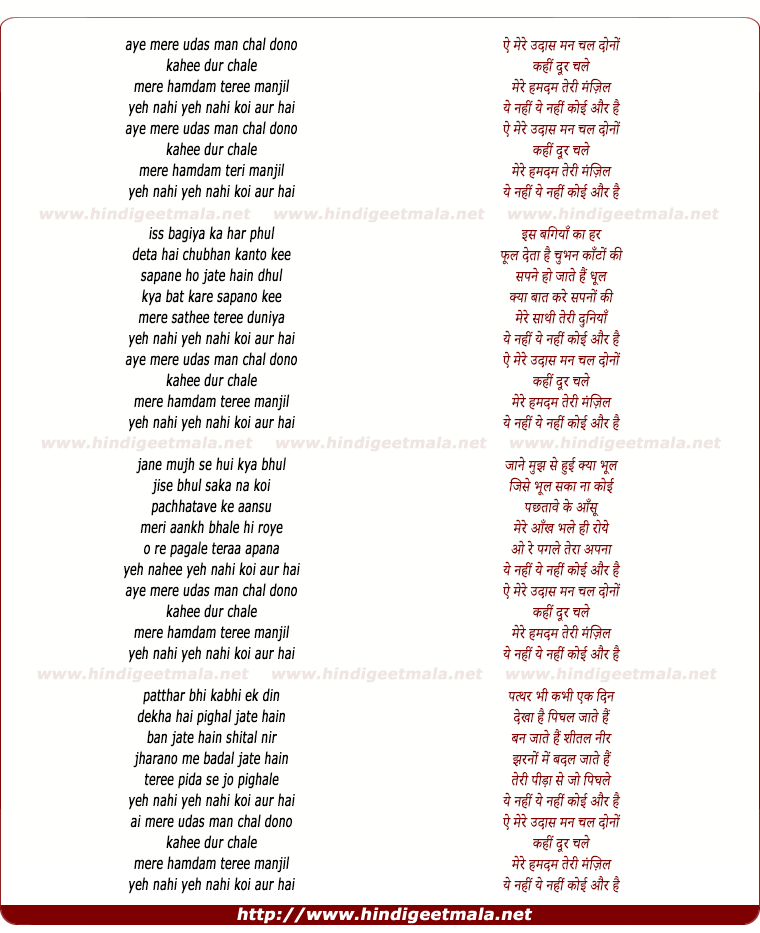 Comments on song "Ai Mere Udas Man"
pravinak on Sunday, June 14, 2009
This song showsn the greatness of Divibe voice of Yesudas. I am from
Maharashtra but I bow to him...what a voice. We are fortunate to hear
something like this..OIts only INDIA whi9ch can produce the feelings from
the bottom of heart..Hats off

SyAm Enjoying Monsoon on Thursday, December 23, 2010
Thats DAs sir, so he called in Kerala as GanaGandarv, One of The beautiful
voice among the best of 10 in world.. check out his more beautiful
songs in malayalam and tamil, and also in Hindi Syam Kerala

Manish Sharma on Thursday, March 12, 2009
The movie is ' Maan Abhimaan ' and the singer is Yesudaas. Does anyone have
another Yesudas great " Ek Subah Ek Mod Par " which is also picturised on
Raj Kiran from the excellent film " Hip Hip Hurray "

TushNikaM on Wednesday, May 20, 2009
God Bless Hime.Those who posted this Vedio...Awsome,mindblowing,superb.cant expalin in words.such a great voice.I LOVE THIS SONG A LOT.Thanks Dear
shahnira1 on Sunday, June 05, 2011
so sad. Equally sad story in Raj Kiran's real life. I just heard few days
ago that Raj kiran is in the mental asylum in Atlanta since last 10 years
due to depression. His wife and son left him. I hope this is not true.