Average Rating : 4.50
Total Vote(s) : 78
Please rate this song between 1 star and 5 stars (5 stars being the best). Just move your mouse on the stars above and click as per your rating. Your rating will really help us to improve our website. 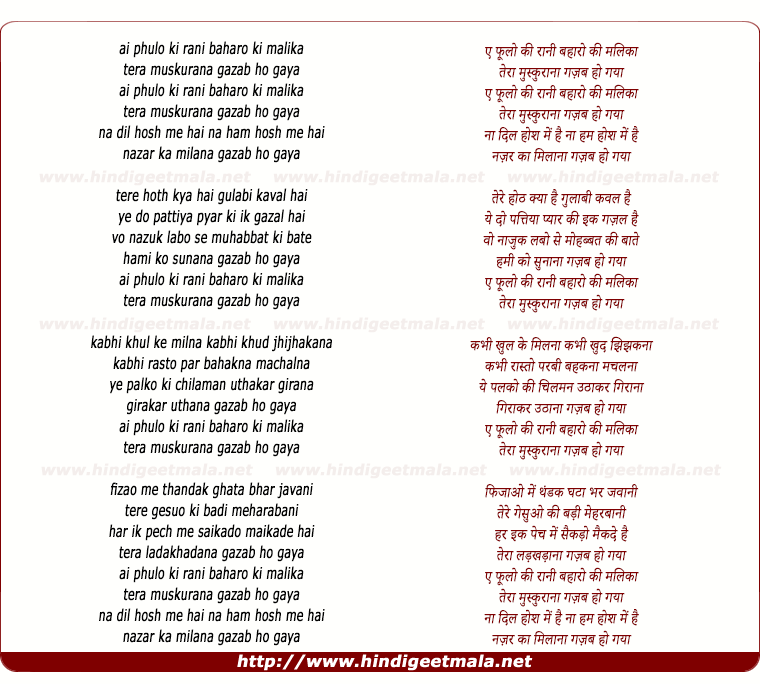 Comments on song "Ai Phulon Ki Raani Bahaaron Ki Malikaa"
shabrat27 on Saturday, September 13, 2008
Wah Wah kya baat hai, Mohd Rafi the best,he used to takes the breath away with his voice,heart and soul,i am searching for a songs 4rm Dair e Madina (Gulon ka rang jo nikhra tere badan ki tarah) if any1 have these songs plz put them on you tube,he is the world best singer,plz put more songs of Rafi's on net,thanx again
ravi111792 on Saturday, February 13, 2010
Kaise batha hoonn,,,, Dhin aur raat,,,,, paagal bangaya hoonnnn,,,, sunkeee aise gaaneee,,,, Love to see Rajendar Kumar Ji and Sadhna Ji on screen again. Full of expressions and love. Sadhna jeee wonderful, big fan of her.
shripad20 on Tuesday, December 22, 2009
A simply marvellous song!!! Sadhna looking so beautiful!!! I have met her
in mumbai.She is very delightful.I am quite lucky to meet her.she is my
most favourite actress

aceji on Sunday, June 16, 2013
MAGIC of SHANKER-JAIKISHEN, you will find in mostly RAJ KAPOOR, RAJENDRA
KUMAR and SHAMMI KAPOOR films.Rafi, Lata and Mukesh got their best songs to
sing.

Mrpkv1006 .pkv on Wednesday, June 02, 2010
Oh so soothing. so melodious. SJ have put their life into this song. And
rafi saab wah re wah jadu hai jadu . awaz nahi