Video of this song from youtube
Average Rating : 4.67
Total Vote(s) : 90
Please rate this song between 1 star and 5 stars (5 stars being the best). Just move your mouse on the stars above and click as per your rating. Your rating will really help us to improve our website. 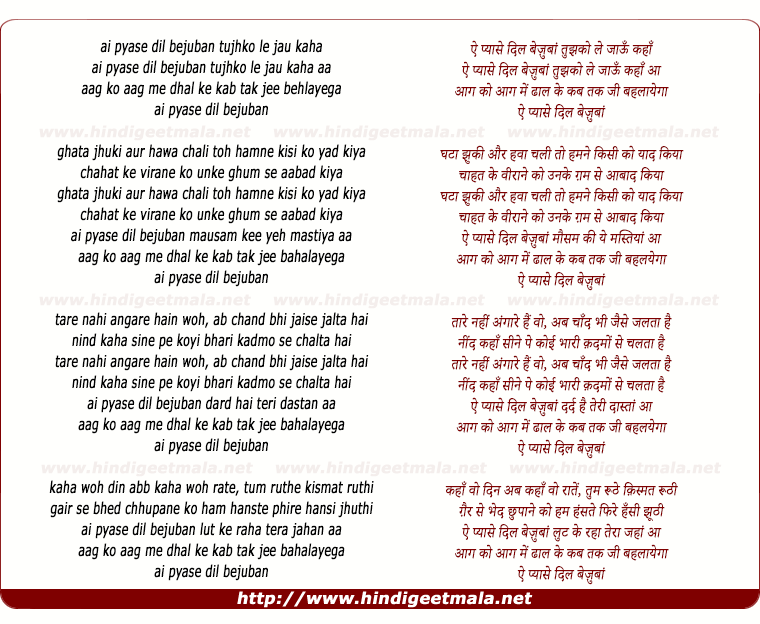 Comments on song "Ai Pyase Dil Bejuban Tujhko Le Jau Kaha"
RealMusicKing on Thursday, June 10, 2010
@VivaPune . Mukesh did see some real bad days. I believe the year was 1955 when he did not have a single movie recording to his name. Song "Suhana safar aur yeh mausam haseen" from Madhumati was to be sung by a Bengali singer by the name of Dwijen Mukherjee but was given to Mukesh. Film Yahudi song "Yeh mera diwanapan hai" was to be sung by Talat Mahmood per Dilip Kumars request but Shankar threatened to cancel the song if not given to Mukesh.
RealMusicKing on Thursday, June 10, 2010
Ajay. Thank you. I heard the song "din albele pyar ka mausam" back in 1978 and had taped it on a cassette(which was later stolen from me). Till today, I never knew the name of the movie. Yuan passed me the info and an upload in a private stage show in Sri Lanka. Do you have it in your collection by any chance. It's a real nice song I think it's taken from a Christmas carol "Silent night, Holy night"
RealMusicKing on Monday, September 06, 2010
@Rmehtacpa I thought the movie was not released and all it's negatives were burnt by the Indian govt. because it was a 100% copy of a hollywood film? Where did you see it? Do you have any clippings of the movie / songs ?
RealMusicKing on Monday, September 06, 2010
@Rmehtacpa Hello and thank you for your message. You mean Dil Albele Pyar Ka Mausam was filmed on Kishore?
Rmehtacpa on Sunday, November 28, 2010
@RealMusicKing I do not recall too well as I was too young. However, since
Jaikishan was from a village called Vansada in Gujarat. His classmate from
primary school had worked for us in Navsari and he had gone to see the
movie to see Jaikishan singing the song on Piano Ye pyase dil bejuban in
this film and we too went. I think the movie was released and ran briefly
at theaters before it was banned and destroyed. As for clipse of this
movie, it will be a miracle if we would ever see any. Wish...