Video of this song from youtube
Average Rating : 4.65
Total Vote(s) : 54
Please rate this song between 1 star and 5 stars (5 stars being the best). Just move your mouse on the stars above and click as per your rating. Your rating will really help us to improve our website. 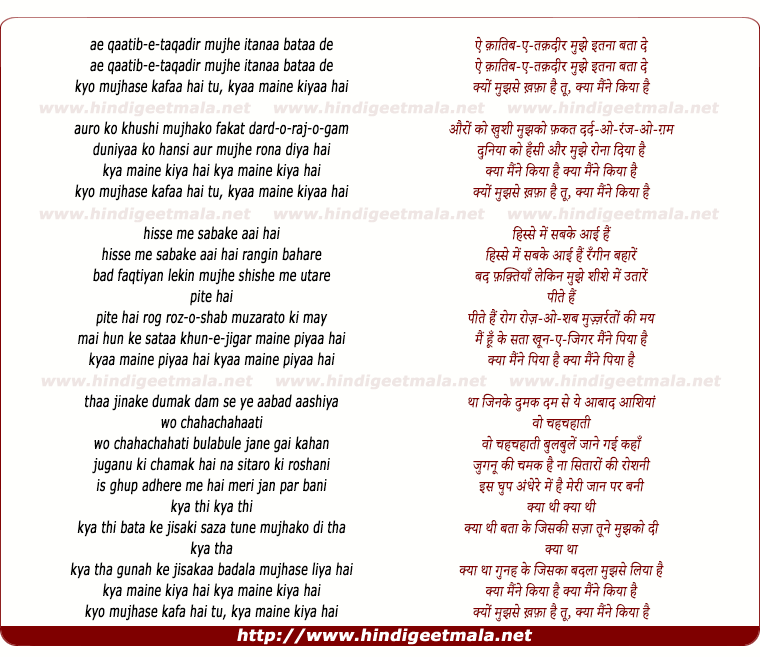 Comments on song "Ai Qaatib-E-Taqadir Mujhe Itanaa Bataa De"
Zil Hasnain Kazmi on Monday, January 24, 2011
I have listened to this terrific song after a long time. What a great song.
Though the style and the way of singing does not belong to my generation
and does not appeal but the composition and the lyrics of this song and
an-other gem of this singer "gham diye mustaqil" have made this artist a
legend. So much so his death made these songs immortal. When ever we listen
to these two particular songs, we often goes in to those memories in which
his death being occurred.(24rth January 2011)

hira1ft on Sunday, October 09, 2011
Absolutely legendry voice, K.L.Saigal Shb had a perfect voice for such melancholic Ghazals. He been worshipped and admired for that deep and smooky voice, my late father was a great admirer of Saigal shb.We had His Master's Voice grammaphone to play K.L. Saigal.
Many thanks for showing us this unique footage of late K.L. Saigal, mansoorn'' ji.

Mushtaq Ahmad on Sunday, December 06, 2009
It is a great song and K.L.Saigal was a great singer of all time to come. I
have no words to admire his style and his voice. It is God given gift which
was bestowed upon him by the God.

farhadgnr on Tuesday, June 24, 2008
what an amazing song; what a perfect voice; how could he be so smooth and powerful in the same time? no song has ever touched me like this, and I understand just a couple of his words...
BOB IYER on Monday, July 09, 2012
One of Kundan Lal Saigal's masterpieces !Could listen to this one hundreds
of times! The quality of his voice,his rendition the feelings he puts in
this ghazal ,simply superb!