Video of this song from youtube
Average Rating : 4.47
Total Vote(s) : 83
Please rate this song between 1 star and 5 stars (5 stars being the best). Just move your mouse on the stars above and click as per your rating. Your rating will really help us to improve our website. 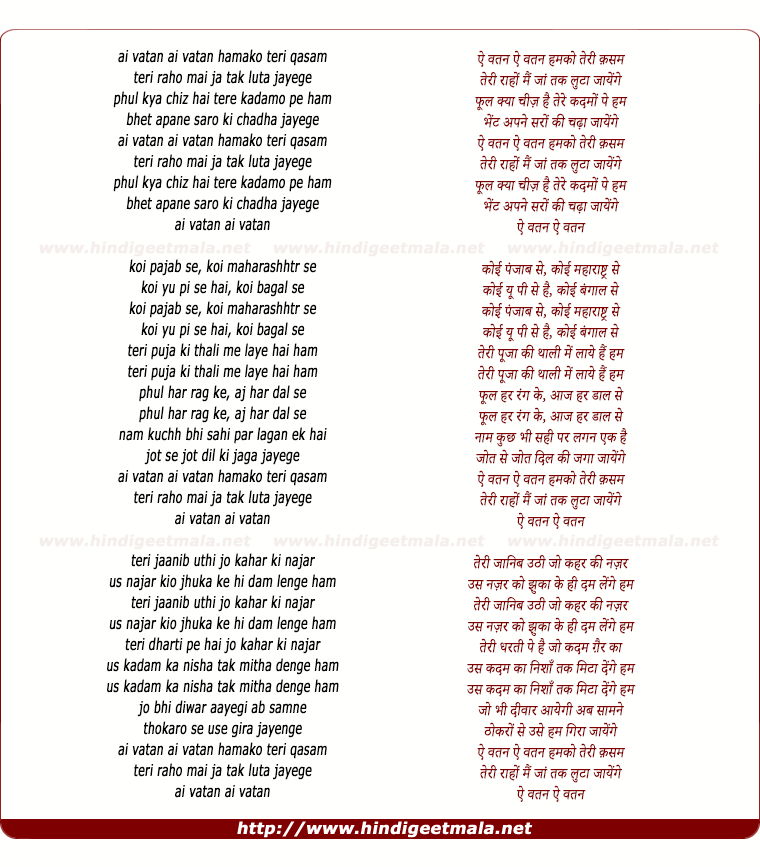 narasimharao1953 on Monday, March 01, 2010
Rafi saab gave so much to this song that Patriotism just flowed and tears trickled. What went wrong with Manoj that he severed with Rafi saab in his later films. It could be that Manoj couldn't match Rafi saab's pitch or just had some other motive.
asdfghj1947 on Friday, March 26, 2010
its certain that upcoming generation will 4get SHAHRUKH,AMITABH,AAMIR etc. but will always admire u 4 ur deshbhakti.
Cphari on Thursday, July 10, 2008
You know the "great" king Akbar, which I am sure you are worshipping,
killed 30,000 unarmed men women and children in the forts of Rajasthan
because they didn't convert to Islam. Shivaji was a great king. The present
borders of India are pretty much the extent of the Maratha Empire. I am not
even Marathi, infact I am Gujju fyi. If it wasn't for Shivaji and the
Maratha empire, god knows what would the map of India be like.

83ashu4u on Sunday, June 20, 2010
bhagat singh rocks.mohd rafi as usual
impeccable..i think the movies by manoj Kumar should be made
mandatory for all politicians.before they enter the
parliament...