Video of this song from youtube
Average Rating : 4.28
Total Vote(s) : 65
Please rate this song between 1 star and 5 stars (5 stars being the best). Just move your mouse on the stars above and click as per your rating. Your rating will really help us to improve our website. 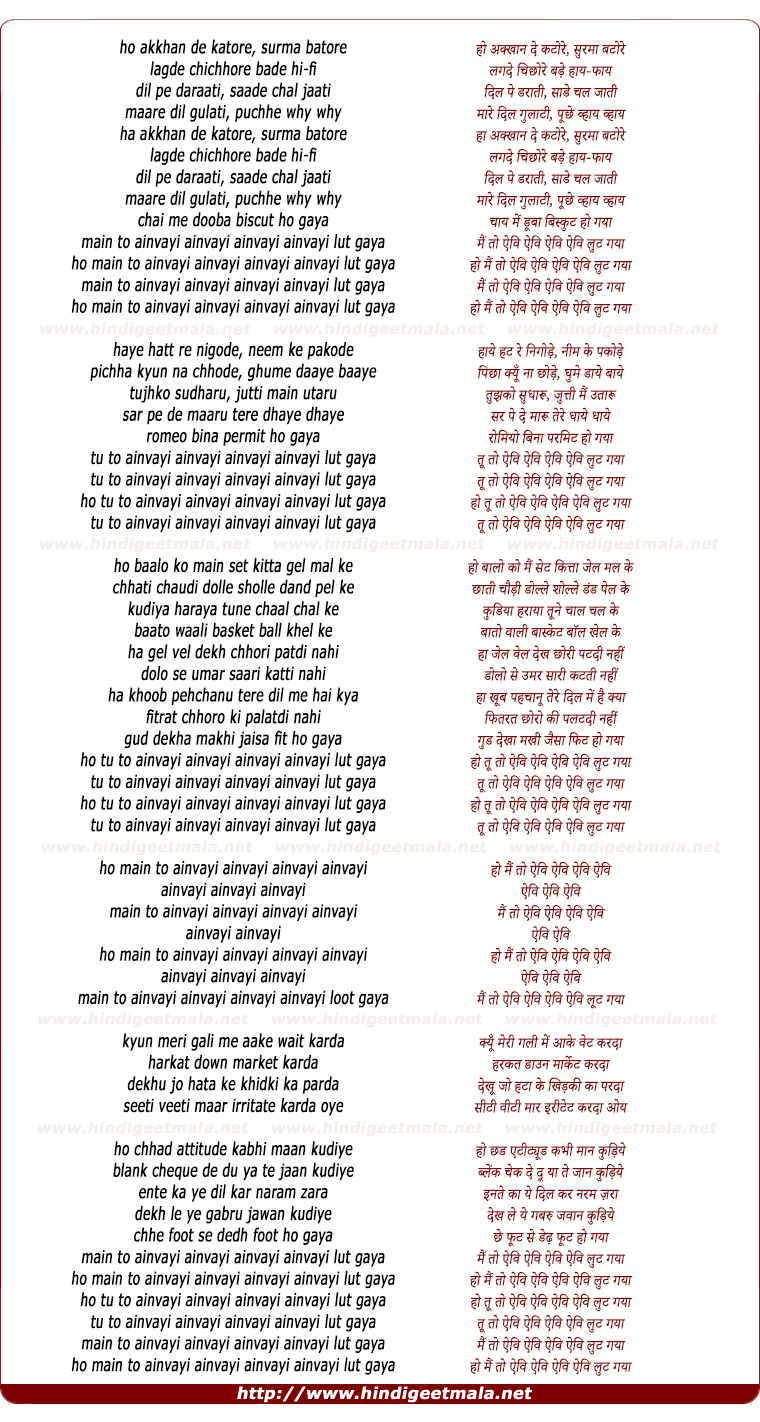 Comments on song "Main To Ainvayi Ainvayi Ainvayi Ainvayi Lut Gaya"
djthugsta on Friday, November 26, 2010
Don't mean to make any predictions, but I think yash raj wants to launch a
new Shah Rukh Khan, like they did in DDLJ, well I hope this kid does
wonders that SRK did in DDLJ, hoping, SRK became so corny and uptight
nowadays and he doesn't act in those typical rom-com films anymore, so we
need a fresh face, and ranbir and Imraan are in a different zone of their
own, so can't expect much from them. Ranbir's more like sanjay dutt then
SRK and Imran's more of a actor you would see in hollywood romcom

movie is looking cool bhai! yashraj is back in form!!

shilpa82494 on Monday, November 29, 2010
lol her expressions are too horrible for words...oh well, at least she's trying...i think...and does anyone else think this guy needs a hair cut?? also, the dance steps are off and over done. idk they both just look disconcerted trying to do them. and neither of the singers' voices matched. not to sound like such a pessimist but i know i haven't written a single nice word. there's a reason for that. on the up side, i actually think the movie might be interesting. but this song was a fail.
Webinspector1 on Monday, May 09, 2011
Sunidhi Chauhan is a very talented and versatile singer, she should be highly commended for the variety of songs she has sung that are ALL hits !
Love you Sunidhi. Keep up the good work.
I like Anuskha Sharma she is a fresh energetic actress, hope to see a lot more of her in the future. Ranveer has a lot of potential he strikes me as a dynamic young man who is the life of the party, wish him all success too.!!! Best of luck to all of you .;)

LumiereH on Friday, January 14, 2011
@tuttygoo Girl: Move you .., you neem ke pakode (salty fried indian
dish) Why don't you leave me alone, you spin around me right and left.
Should I make you decent by taking off my shoe Hitting you on the head, on
the right right You became Romeo without a permit Your just somehow somehow
somehow broke x4 Why do wait in my street? Do low class behavior? When I
move the curtain in my window, You blow a whistle and irritate me.