Video of this song from youtube
Average Rating : 4.68
Total Vote(s) : 57
Please rate this song between 1 star and 5 stars (5 stars being the best). Just move your mouse on the stars above and click as per your rating. Your rating will really help us to improve our website. 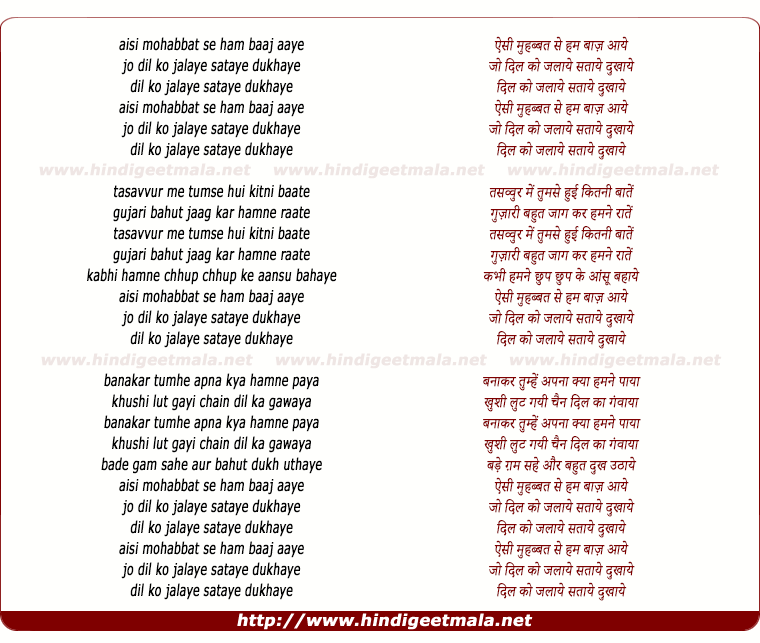 BharatGul on Saturday, April 28, 2012
How did I ever miss this superb upload ? Lataji's voice always enhances the beauty of any star and they in turn lend their own visual emotionality to her voice ! Thanks, Suhanee.
shaukatjamil on Thursday, June 09, 2011
This is one of the finest song ever recorded and is among my top twenty. In fact all songs of Nirala are peerless.One such song which was deleted from the film and is hard to come by I miss.It is titled like KHOI KHOI CHANDNI HAI SOI SOI RAAT HAI NAYA NAYA PYAR HAI YEH PEHLI PEHLI BAR HAI.Can anyone upload it.
iahmadutube on Saturday, January 30, 2010
My dad used to say that " mere dil ke chaar khane hein, teen tumhari ami ke our eik Madhubala ka".after seeing this viseo I can see why. Beautiful song.
View all 11 comments related to song Aisee Muhobbat Se Ham Baaj Aaye
Popular Links on HindiGeetMala