Video of this song from youtube
Average Rating : 4.63
Total Vote(s) : 96
Please rate this song between 1 star and 5 stars (5 stars being the best). Just move your mouse on the stars above and click as per your rating. Your rating will really help us to improve our website. 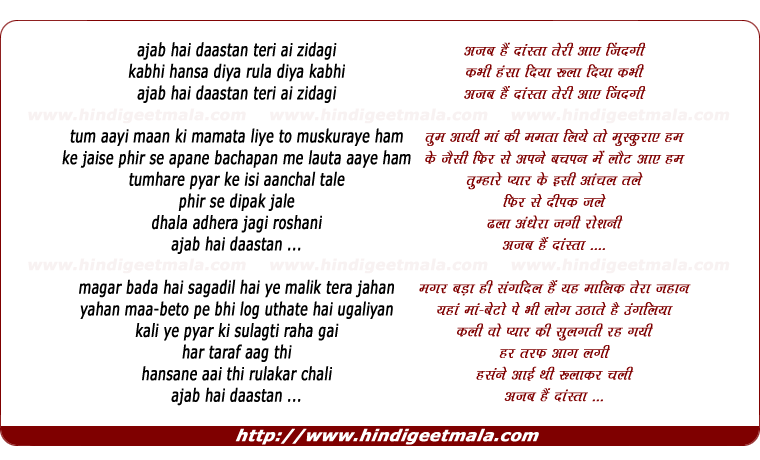 Comments on song "Ajab Hai Daastaan Teri Ae Zindagi"
aceji on Sunday, December 13, 2009
SJ used Mukesh for a few songs in Junglee and Aas ka Panchhi, but then ALL
Shammi and Rajendra Kumar films had RAFI for heroes and comedians.They were
as guilty as others who gave most songs to RAFI. Now Rafi was fantastic,
but unfortunately Talat, Mannadey, Hemantda were all pushed on the margins
due to Producers going mad on RAFI. This was the reason Kishoreda got less
work then. After ARADHANA peple wanted change and Kishore got his dues.
Mukesh was lucky , popular mainly due to RAJ KAPOO.R

sonny19xx on Sunday, June 06, 2010
@LazzzyyLamhe if it is true that the md of the caliber of sj told that,
then no more questions . argument ends. kk could be good for some other
type songs. thanks shreeji45555. what a song ! sj rafi . i love this
classic. piano play and the tabla play is out of the world.

Rmehtacpa on Tuesday, August 27, 2013
Not as smoothly and easlily as you say by Kishor. NO. At least think that
SJ were most talented music directors and they wouldn't have picked Rafi
for nothing. Just think. And again the versitility Rafi had even well
matched Kishor here as a Play - Back singer.

ParthoGuru on Thursday, October 29, 2009
I am not able to understand why SJ had picked up Rafi for this song. This
is could easily be rendered by Kishoreda.

tasveeeren on Sunday, December 13, 2009
Kishore was not capable of singing high pitch songs, hence it went to Rafi
Saheb, who sang it so beautifully.